More than 250 donate to UHV for Giving Tuesday event 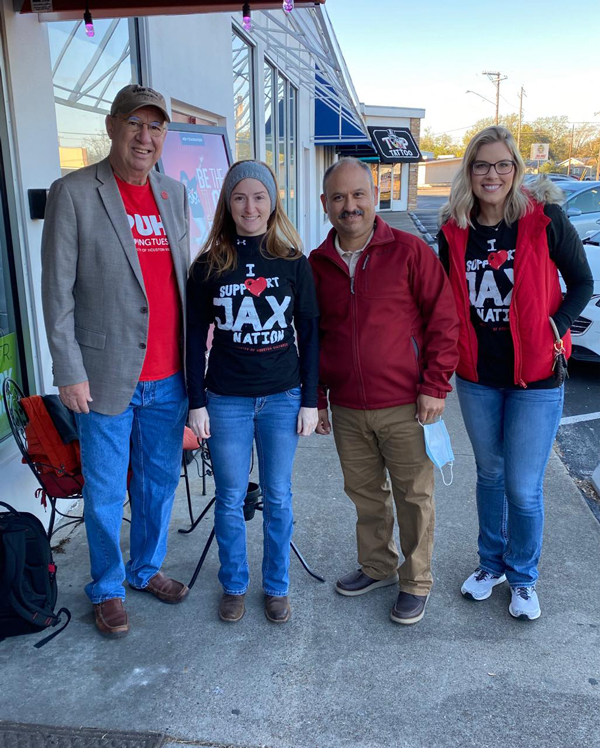 The University of Houston-Victoria was the recipient of a $10,000 challenge donation from a Victoria business after the university surpassed a goal of 250 donors during its fifth annual Giving Tuesday campaign on Dec. 1.

In total, the university received $45,614 from 256 donors, including UHV faculty, staff, students, alumni and community members, as well as donors from Australia, Canada, Nigeria and Colombia. The total raised includes a $10,000 challenge donation from KMH Wealth Management LLC, which was offered as an incentive to reach a goal of 250 donors for the event. The wealth management company is owned by UHV alumni Lane and Phyllis Keller. The university created a video to showcase the results of Giving Tuesday and thank supporters.

“The UHV and Victoria communities, and even those from around the world, have turned out this year to support our university because they understand the importance of the mission of UHV to provide quality higher education,” UHV President Bob Glenn said. “It is an incredible feeling to see the support from so many during these tough times, and we appreciate that these donors kept UHV in mind during the season of giving.”

Donations were collected online and at different locations on campus and in the community. Gifts ranged in size from 50 cents to $10,000, and online donations were given from 12:40 a.m. to 11:46 p.m. Giving stations were set up at four UHV locations, as well as The Box Coffee Bar at Airline Road and Laurent Street and Crossroads Bank. Volunteers who worked the stations included UHV students, faculty and staff. KNAL 93.3 FM radio station also had three live remote sessions from the donation stations to spread the word about the event and how the community could support UHV.

“In every way, UHV is pushing forward despite the pandemic,” said Kira Mudd, UHV director of alumni relations and annual giving. “Although we were unsure of the response we would receive on Giving Tuesday this year, we were elated at how many people continue to support the university during such tumultuous times.”

Each donor was able to give to a specific area of the university, and 46 UHV programs, departments and scholarships received donations. The top areas that had the most donors also each received an additional $1,000 from the donation from KMH Wealth Management LLC.

The programs that had the most donors were the student food pantry, the International Alumni Scholarship Fund, the Student Emergency Fund, UHV Athletics, School of Business Administration scholarships, the Student Affairs Unit of Excellence Fund and the university’s general scholarship fund.

“The motto for this year’s UHV Giving Tuesday was ‘Be the one on Dec. 1,’” said Jesse Pisors, UHV vice president for advancement and external relations. “I am so grateful to every alumnus, student, faculty, staff and community member who took time on Giving Tuesday to ‘be the one.’ Giving is always individual. It starts with me. But it becomes something powerful and special when large numbers – 256 to be exact – simultaneously show their support for an important cause: our university.”

UHV alumna Loveth Ohenhen knew she wanted to do more this year to give back to her alma mater. Ohenhen graduated in 2018 with a Master of Science in computer information systems and was an international student from Nigeria when she attended UHV. She now works at Dell Technologies in Atlanta.

“When I was a student at UHV, I received unexpected scholarships, and more than the scholarship amount, I remember the feeling of gratitude that someone who didn’t know me cared about my education,” Ohenhen said. “UHV has had such an important impact on my life, and rallying support was one way I could help give back to UHV. It is an honor to know that so many people donated on behalf of the International Alumni Scholarship.”