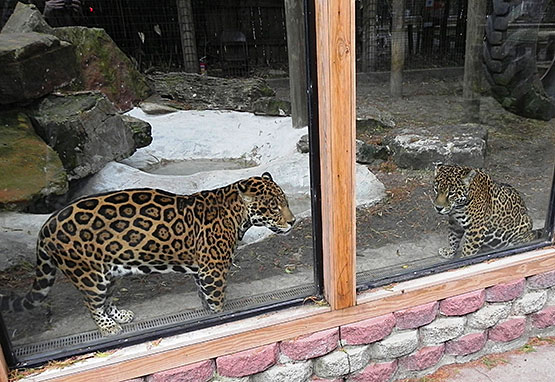 jaX, left, and Sophia get acquainted Tuesday in the jaguar exhibit at the Texas Zoo. The zoo has implemented a breeding program by slowly introducing the two jaguars.

jaX, University of Houston-Victoria’s real-life mascot, has a new companion in his home at the Texas Zoo.

jaX has carefully made the acquaintance of Sophia, a female jaguar from a zoo in Maryland who has come to Victoria on an open-ended breeding loan. Zoo officials are hopeful the end result will be jaguar cubs.

“jaX comes from Mato Grosso, Brazil, and he’s a beautiful sub-species of jaguar,” said Michael Magaw, Texas Zoo animal curator. “Being that they are endangered species, we have initiated a breeding program to help the population.”

UHV made a donation to the zoo to bring jaX to Victoria and renovate the former lion enclosure for the male jaguar. The 5-year-old jaguar came from the Wild World of Animals in Pennsylvania. He arrived at the zoo in June. jaX, which stands for “jaguars are eXceptional,” gets his name from UHV’s mascot.

“jaX has quickly become a beloved symbol of the university and a great addition to the zoo,” UHV Interim President Vic Morgan said. “Jaguar cubs certainly would be a thrilling addition.”

Sophia arrived at the Texas Zoo in late October. She originally is from an area north of Brazil, Magaw said. She is smaller than jaX and has spots on her neck and head. Most of jaX’s spots are on his head, and he has rosettes from his neck down.

For the first month, jaX and Sophia could see each other through a fence but could not interact. They rotated being in the exhibit.

“That gave them a chance to get used to each other’s presence and smells,” Magaw said. “They got to know one another without a risk of hurting each other.”

Magaw said breeding can be tricky and sometimes dangerous because jaguars are solitary animals. The only time they come together is when a female is in heat. She displays signs and vocalizations to demonstrate that occurrence.

Magaw said jaX and Sophia did really well together when both were in the exhibit for the first time.

“They have got to really trust each other in order to breed,” Magaw said. “They get in little scrapes while building trust, but they don’t get seriously hurt. They’ve gotten in little slapping contests, but no one has gotten overly excited.”

In a zoo setting, zookeepers usually stand by with a water hose and fire extinguisher just in case things get out of hand, Magaw said. There have been incidents elsewhere where jaguars have gotten hurt.

Sophia went out of heat after awhile, so they were split back up. Female jaguars come into heat every two to three months. This week they were put back together in the exhibit.

“Eventually, you’ll see signs they have bonded,” Magaw said. “They prefer to be in each other’s company, and that’s when we can leave them together.”

Magaw said jaguars usually have one or two cubs. Magaw said he’s had successes at other zoos with jaguar breeding. A cub or two typically arrived within a year of introductions.

A breeding program sign will be installed to give zoo visitors information about what is going on, said Amanda Rocha, Texas Zoo executive director.

“We have high hopes that our breeding program will work out,” Rocha said. “This is exciting news for us, and we have our fingers crossed.”