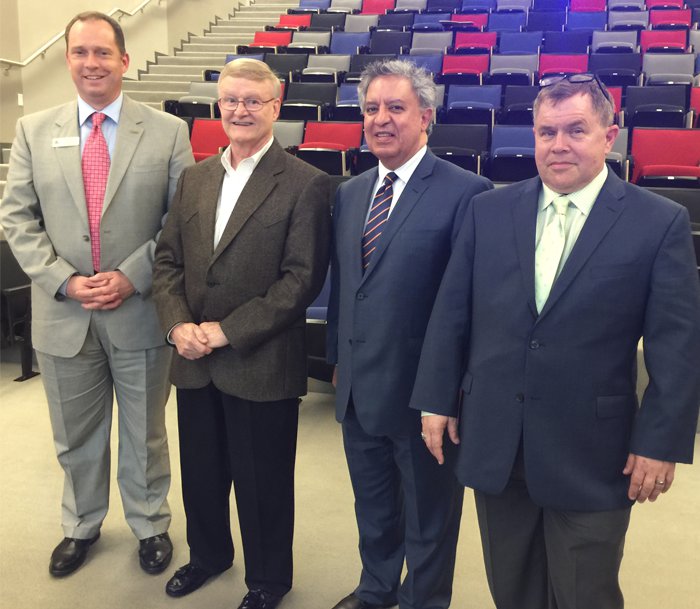 SUGAR LAND – University of Houston-Victoria graduate business students soon could lend a hand in marketing the rebirth of the gull-winged car immortalized in the movie “Back to the Future.”

“Mr. Dartt’s lecture was enlightening and entertaining on several levels,” said Farhang Niroomand, dean of the UHV School of Business Administration. “The story of how the company persevered and is now on track to produce new DeLoreans next year was impressive and inspiring. I think our students came away with some valuable lessons.”

Jifu Wang, associate dean of the UHV School of Business Administration, said Dartt is interested in having UHV Master of Business Administration students get involved by looking at how the company can take advantage of its branding and market the new car to the media. UHV marketing faculty members are considering making it a class project, he said.

“This will be a great opportunity for our students to get hands-on experience in a setting that is generating tremendous interest,” Wang said. “They can study what’s happening in the specialty automobile market and then look at providing analysis on finance, marketing and promotion.”

Dartt has worked in senior corporate management for 35 years. He came up through the engineering ranks, working for PepsiCo, Owens-Illinois and Bristol-Myers. Since earning an MBA from Xavier University in Cincinnati, Dartt has been president of nine companies in the medical, dental, electronic and specialty retail markets. He is well known for helping companies turn around from difficult situations.

Anna Roberts, a UHV MBA student, said she enjoyed hearing about how Dartt came into troubled companies and breathed new life into them. She also saw a lot of relevant tie-ins with her studies.

“He gave insight that touched on topics many of us have studied in our college courses such as international business, marketing and target customer segments, political influences, exchange rates, expansion and contraction and financial woes,” she said.

Dartt began the presentation by introducing the history of the company. He talked about its origin in Ireland in 1975, its expansion and its eventual move to the U.S.

“It was interesting to see how a company started from scratch and gradually grew into such a status that it was featured in ‘Back to the Future,’” Wang said.

After the insolvency of the original DMC, mechanic Stephen Wynne started a separate company using the DeLorean Motor Co. name. Mr. Wynne later acquired the rights to the DeLorean name along with the original blueprints to the car, and the entire original parts stock from the Ireland factory.

The company moved to Humble in 1987 and was dedicated to keeping the approximately 6,500 remaining DeLoreans on the road by supplying spare parts and restoration work. It was not legally allowed to assemble new cars, Wang said.

That all changed in December when Congress passed the Low Volume Motor Vehicle Manufacturers Act. The act allows small companies to produce a limited number of completed replica motor vehicles that resemble the appearance of cars produced 25 or more years ago.

The company announced in January that it would begin assembling modern versions of the DeLorean by the first quarter of 2017. It would be the first time the cars have been manufactured since the early 1980s.

Dartt, who has taught classes at UH-Downtown and other area universities, concluded his talk by providing some tips on good management and how students can become great leaders, Wang said.

“While many speakers try to provide a climatic ending to their presentations, Mr. Dartt closed with a meaningful yet profound phrase,” Roberts said. “He told us to go and simply ‘let your light shine.’”