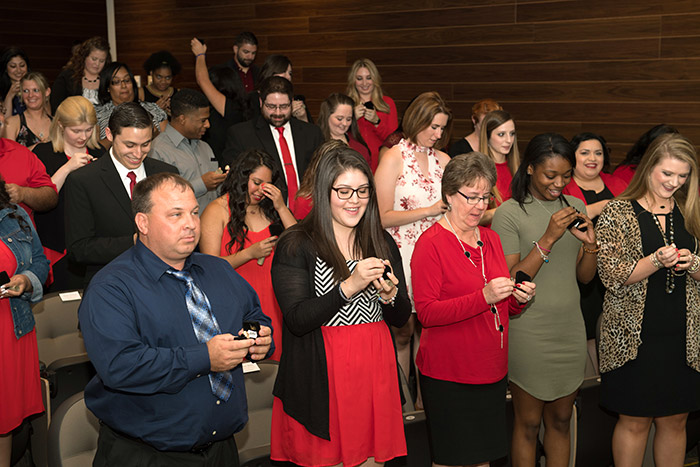 On the count of three, 54 University of Houston-Victoria students and alumni opened their boxes Friday to reveal their class rings.

Together they shouted, “Go Jags!” as they put on their rings for the first time.

The students and alumni were the first group to receive official UHV class rings. The ceremony, hosted by the UHV Alumni Relations and the Student Government Association, was one of several new traditions associated with the rings.

“This event represents the culmination of several years of planning and preparation by UHV students, alumni, faculty, staff and administration,” said Kira Mudd, UHV director of alumni relations and annual giving. “The rings represent so much to these students. It represents their academic accomplishments, the sacrifices they made, their hard work and perseverance, and the friendships they made along the way.”

For Autumn McFarland of Victoria, attending UHV has been a growing experience that she will take with her. She came to the school without knowing anyone, and she ended up joining SGA during the 2012-2013 school year. This helped her create long-lasting friendships and be part of building what UHV is today.

“Coming to UHV has let me be part of so many things and new ideas,” said McFarland, who earned her Bachelor of Science in psychology and criminal justice on Saturday. “It’s great to see how much we can all do when we put our minds to it. The ring makes it feel official. It’s hard proof of what I’ve accomplished.”

After the students received their rings, they had the option to take part in the Jaguar Dunk. Water from the Guadalupe River was used to create temporary red dye. One by one, the students dunked their right hand into the dye and brought it out making the UHV hand sign. The dye stained the student’s hands red for 24 to 48 hours.

Amber Machacek of Yoakum dried her hand off with a UHV keepsake towel as she reminisced about how quickly her time at the university went by. She will receive her Master of Business Administration in entrepreneurship in December.

“It feels like I just started the program yesterday, and now I’m here,” she said. “I come from a small town, and being part of something as large as a university is special. I’m honored to be one of the first students to take part in this tradition.”

Before Friday’s ceremony, the rings were “blessed” by jaX, UHV’s live mascot at the Texas Zoo. On Thursday, the rings were placed in a box decorated by UHV students and secured in jaX’s exhibit for 24 hours before being brought back to UHV for the ceremony.

During the ceremony, SGA President Megan Huerta explained the symbols on the ring. On one side, the ring features the UHV Athletics jaguar mascot on top of the state of Texas. These symbols are meant to be especially meaningful for out-of-state and international students, who will have a memento of the time they spent in Texas. On the other side, there is a group of symbols that represent UHV and Victoria. These include: