Most employees ever give back to UHV 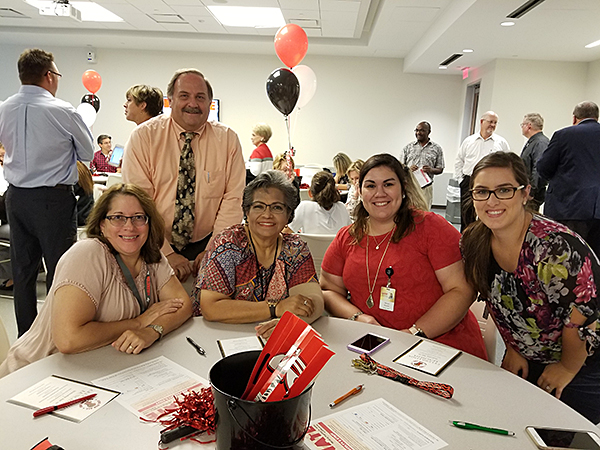 UHV employees Eunice Mesa, left, Joe Ferguson, Judy Rodriguez, Devon Dueser and Lauree Tomas attend the 2018 One For All, All For One campaign launch on Sept. 20. The 2017 campaign saw a record-breaking number of employees take part.

The University of Houston-Victoria recently saw an all-time high in employee giving as part of a campaign to support a wide variety of programs, scholarships and initiatives at the university.

A total of 189 faculty, staff and administrators participated in the university’s 2016-2017 One For All, All For One employee giving campaign. Their total contributions brought in $78,919, a 27 percent increase from the previous fiscal year.

“It’s been amazing to see the UHV family come together to support the university and its students,” said Kira Mudd, UHV director of alumni relations and annual giving. “There are so many programs and scholarships that wouldn’t exist without additional support, and employee giving is a major part of that.”

The campaign began in 2006 as a way to encourage employees to give back to UHV programs and initiatives. Through the campaign, donors can designate what their contributions will benefit. Options include scholarships, specific departments, lecture series or initiatives such as the new student food pantry.

Among the 189 contributors, 31 were part of the President’s Circle. These employees gave at least 1 percent of their gross annual pay to the university through the campaign.

“The President’s Circle is a special designation we give to the people who have made a serious commitment to reinvest in UHV,” said Jesse Pisors, UHV vice president for advancement and external relations. “They come from all levels of the university, and their generosity is outstanding.”

During the 2017 fiscal year, which ended Aug. 31, 77 different departments, programs and initiatives benefited from campaign contributions. The university also matches all employee contributions.

“It’s always encouraging to see how much support UHV has from its own employees,” UHV President Vic Morgan said. “When the people who work for the university are willing to put their hard-earned money back into their workplace, we know we’re doing something right. I am grateful for their support.”

UHV recently saw the creation of several new programs and initiatives that are included in the 2017-2018 campaign. Most recently, the university launched the UHV Relief Fund to help students recover losses from Hurricane Harvey. UHV also will be partnering with Victoria College to open JP’s Market, a food pantry for students from both institutions. Employees can contribute to either initiative.

One exciting example of employee giving happened during the 2016-2017 campaign, Mudd said. Joe Ferguson, executive director of UH System IT shared services, fully funded the Doris W. Ferguson Endowed Scholarship to honor his mother, who was a teacher in Victoria.

“This scholarship is something that will benefit our students for years to come,” Mudd said. “And it all came from one of our employees who decided to give back to the university and honor his mother at the same time. It’s such a powerful demonstration of how UHV employees are able to make a big difference for others through their support.”