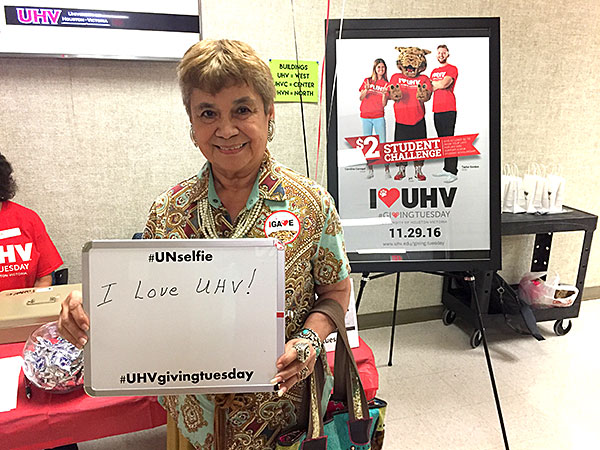 UHV alumna Josie Rivera shares her reason for supporting the University of Houston-Victoria by donating during the 2016 Giving Tuesday event. Giving Tuesday was one of several initiatives that contributed to UHV’s record-breaking year of giving during 2016-2017.

For the second year in a row, the University of Houston-Victoria has enjoyed a banner year of giving.

“It’s incredible to see so much support for our university,” said Jesse Pisors, UHV vice president for advancement and external relations. “These numbers are especially exciting when considering UHV recently launched the public phase of its Here, We Go fundraising campaign. With such a strong, growing donor base, I’m optimistic that we will meet our goals.”

The growing support of UHV was reflected in several areas. Of the individual donors, a record-breaking 546 were alumni, 24 percent more than in 2015-2016. In addition, the university saw an all-time high of 189 faculty, staff and administrators take part in the 2016-2017 One For All, All For One employee giving campaign and raise $78,919, a 27 percent increase from the previous fiscal year.

“It’s exciting to see so many new people contributing to the university,” Pisors said. “It says a lot about the quality of UHV and its importance to the Victoria and Katy communities. Each new donor is a statement of support for higher education, and the university is eager to serve these communities.”

Contributions to the university went to 106 different designations, including scholarships, department excellence funds, donations to specific projects and more. The two most popular designations were the UHV School of Business Administration and the UHV General Scholarship Fund, Pisors said.

“UHV is fortunate to have such an outstanding, supportive community,” UHV President Vic Morgan said. “As we move forward and continue to grow in Victoria and Katy, it is comforting to know that the university is surrounded by those who know the value of higher education and are willing to invest in UHV’s future.”

The 2018 fiscal year, which began Sept. 1, is off to a strong start thanks to the university’s second annual Giving Tuesday, which encouraged university employees, students and community members to contribute on the Tuesday after Thanksgiving. A total of 220 people, up from 144 last year, contributed $15,375 as part of the campaign.

To learn more about donating to UHV, contact University Advancement at 361-570-4812 or makeagift@uhv.edu.