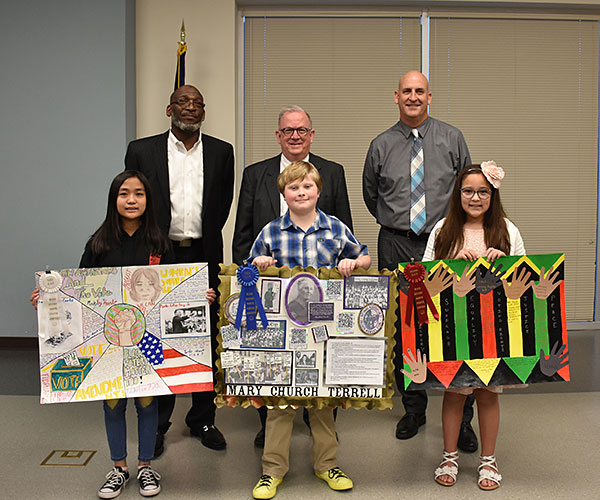 When Tuff Bretz was working on his Black History Month poster, he knew he wanted to feature someone who was the perfect example of voter activism.

That’s when he learned about Mary Church Terrell, an early activist for civil rights and suffrage.

“I thought she was a good example of someone who was an activist,” Tuff said.

Tuff, a 10-year-old student at DeLeon Elementary School, won first place Friday for his poster during the Black History Month Poster Contest reception at the University of Houston-Victoria. He received a $2,000 UHV scholarship and a Victoria College summer camp voucher.

The annual contest is a partnership between UHV, Victoria College and the Victoria Black History Committee Inc., and is open to all fifth-graders in Victoria. Students were asked to design posters around the theme “African Americans and the Vote.”

About 70 posters from the Victoria Independent School District were submitted for the contest. The posters then were judged by representatives from UHV, Victoria College and the Victoria Black History Committee.

“The poster contest is an excellent way to see history through the eyes and artistic talents of our local youth,” UHV President Bob Glenn said. “These posters reflect what the students have learned about individuals who have had a part in shaping our history as a region and a country.”

Tuff’s poster included photos of Terrell picketing for civil rights as well as QR codes that linked to websites with her speeches. His poster also had small toy lights that shined on her portrait. Tuff thanked his mom, Trish Bretz, for helping him with the project.

Khloe Sifuentes, also a 10-year-old student attending DeLeon Elementary School, won second place. Her poster featured a timeline of important events leading up to and after the Fifteenth and Nineteenth amendments. Khloe received a $1,000 UHV scholarship and a VC summer camp waiver.

“It’s exciting to win,” Khloe said. “I learned more about the history of African Americans’ right to vote.”

This is the first time Pearl has entered an art contest, and she said she is excited to have placed in the top three. She received a $500 scholarship and a VC summer camp waiver.

“I learned a lot about African American history, and that’s why I wanted to feature two people who stood up for civil rights in my poster,” Pearl said.

The students received gift bags from UHV and VC.

There also will be a People’s Choice Award later this month. All UHV students, faculty and staff and community members can vote until Feb. 12 by filling out a voting slip at the kiosk on the first floor at UHV University Center, 3007 N. Ben Wilson St., during regular business hours. The top winners will receive prize packs from the Victoria Black History Committee Inc.

The posters will be on display for the public to view through February during regular business hours in the UHV University Center.