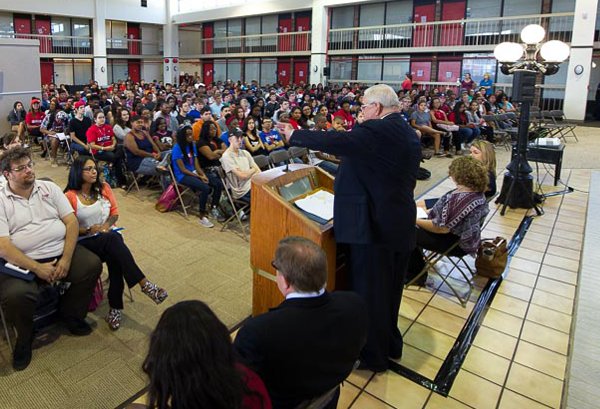 University of Houston-Victoria students, faculty and staff pack Jaguar Hall for the university’s most recent convocation. UHV was the seventh fastest-growing U.S. public master’s university from 2003 to 2013.

A national higher education publication has listed the University of Houston-Victoria as the seventh fastest-growing U.S. public master’s university from 2003 to 2013.

UHV grew from 2,411 students in fall 2003 to 4,491 students in fall 2013, a growth rate of 86 percent. That percentage is the seventh highest of any U.S. public university offering undergraduate and graduate degrees, according to the Chronicle of Higher Education’s 2015-2016 Almanac released Aug.21.

“UHV has developed a reputation for providing an affordable, quality education with a high degree of personal attention,” UHV Interim President Vic Morgan said. “We’ve come a long way since 2003, and it’s satisfying to be recognized by the Chronicle of Higher Education for our rapid growth. With our ambitious plans for new facilities and new programs, we think enrollment will continue to skyrocket during the next decade.”

To compile the top 20 list of fast-growing schools, The Chronicle of Higher Education used U.S. Department of Education data based on total head count of full- and part-time undergraduate and graduate students.

UHV’s enrollment went up every year between 2003 and 2013. Wayne Beran, UHV vice president for administration and finance, said among the reasons UHV brought in more students was the university’s large selection of online degree programs and the offering of many classes in the west Houston area.

“UHV was on the forefront of delivering online education, and many of our online classes were full,” he said. “We also saw tremendous growth at UH Sugar Land, especially from students studying in the UHV School of Business Administration. Our low tuition combined with being one of the few institutions to have face-to-face programs in Sugar Land and Katy allowed us to see swift growth.”

Another source of growth has been the addition of freshmen and sophomores. Fall 2010 marked the first time underclassmen were able to take classes at UHV. Before that, the university offered classes for juniors, seniors and graduate students.

“A 10-year picture is a solid trend of what is happening with enrollment,” Morgan said. “These figures provide validation that the steps we’ve taken to grow the university have been successful,” Morgan said.