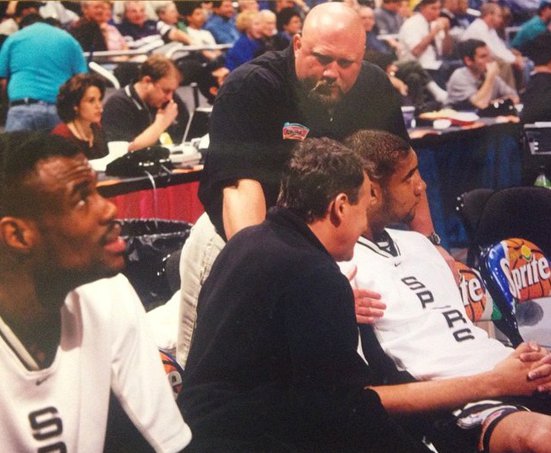 Ed Cosner, standing, former assistant strength and conditioning coach for the San Antonio Spurs, peers over the Spurs bench. Cosner will give a presentation at UHV on Monday.

An internationally recognized strength and conditioning coach with a client list that includes Olympic champions and professional athletes will be the first guest speaker for the University of Houston-Victoria’s new kinesiology program.

Ed Cosner will speak at 6:30 p.m. Monday in the Alcorn Auditorium inside UHV University West, 3007 N. Ben Wilson St., at the UHV School of Education, Health Professions & Human Development fall symposium. The symposium is free and open to the public.

Cosner is a clinical trainer and speaker about the development of the explosive athlete. He has served as assistant strength and conditioning coach for the San Antonio Spurs and strength and conditioning coach at the University of Texas at San Antonio. His clients include Spencer Nealy, a former Texas A&M football player who spent time with the Detroit Lions and Minnesota Vikings; Olympic medalists Josh Davis and Todd Hayes; rugby players Ben and Owen Franks and boxing champion Jesse James Leija.

Raymond Tucker, UHV assistant professor of kinesiology, said Cosner will talk about his journey in the profession.

“He’ll discuss the steps he took and the mistakes he made along the way,” Tucker said. “He has a good story to tell. He’s been just about everywhere.”

Cosner runs PowerSport, a training facility in Cypress. He has worked training camps for the Chicago Bears, Minnesota Vikings and Houston Oilers. He also has served as strength and conditioning coach for the San Antonio Iguanas of the Central Hockey League.

The UHV School of Education, Health Professions & Human Development launched the Bachelor of Science in kinesiology program this fall. Kinesiology is the study of human movement, and the program is preparing students to earn a Texas teaching certification in PE. The degree also can help lead to careers as a coach, trainer or strength coach.

“The addition of kinesiology to our program lineup has already been a draw for students,” said Fred Litton, dean of the UHV School of Education, Health Professions & Human Development. “Having guest speakers like Mr. Cosner further enhances the program and gives our students a chance to interact with an accomplished professional in the field.”

Tucker plans on regularly incorporating guest speakers into the degree program so students can learn from the experiences of others.

“Some people think they will graduate and get this great coaching job right away without realizing there are dues to pay,” Tucker said. “Most coaches go through ups and downs until they finally land that dream job. What they can learn from Mr. Cosner is how he handled those experiences to get where he is today.”

Tucker said since the kinesiology program is new, he wanted to have a couple of public events this school year to raise more awareness. Monday’s event will include a meet-and-greet before the speech and a question-and-answer session after Cosner’s presentation.

The UHV School of Education, Health Professions & Human Development offers a symposium every spring and fall. The events are a free public service the school offers to help educate the community about topics of interest.