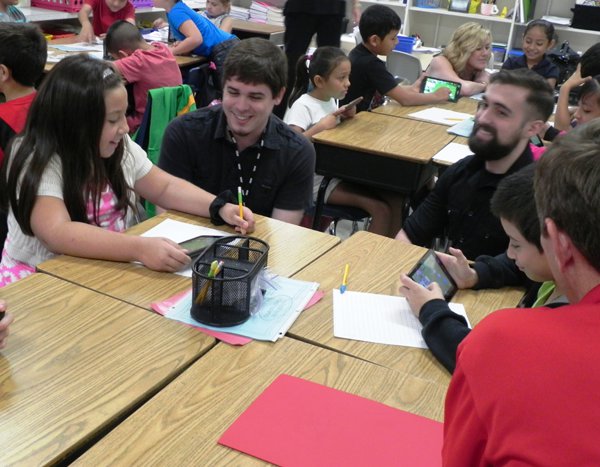 Mckinzee Billasao, left, and Theo Balsadez, right, third-graders at Bloomington Elementary School, chat with University of Houston-Victoria graduate students David McFaddin and Stephen Witt about the math app they designed. UHV and INVISTA partnered to create the game to bolster the math abilities of Bloomington students.

BLOOMINGTON – Many Bloomington Elementary School students have spent the past month learning multiplication and fractions while defending against monsters who insist on attacking their math castles.

“Math Castle” is an educational app developed by the University of Houston-Victoria thanks to a $25,000 grant from INVISTA. The 8,000-question game designed by UHV graduate students and math education professor Barba Patton is providing a fun way for students in second- through fifth-grade to improve their math skills.

“The idea behind the app is to motivate students and to remove math anxiety,” Patton said. “The premise is to teach basic computation skills, which gives the teacher time to develop math vocabulary and problem solving abilities.”

Those conversations led to plans for a pilot study regarding the creation and effectiveness of a math app. Local INVISTA leaders were enthusiastic about taking part in the study.

“INVISTA is honored to partner with the University of Houston-Victoria to develop this innovative pilot program that will assist with advancing math skills in elementary students,” said Kevin Burke, INVISTA’s Victoria site manager.

Burke said a strong foundation in math is critical for all students.

“Our community and INVISTA rely on a well-trained workforce, which starts with a strong science, technology, engineering and math education,” he said. “For more than 15 years, we’ve provided hands-on science curriculum at our wetland education center. Now, we’re thrilled to expand our support of local STEM education through this innovative math program. Our hope is ‘Math Castle’ will be a fun and motivational tool for students and will reinforce the math concepts taught in the classroom.”

“It’s rewarding to see INVISTA making a difference in enriching the math skills of young people in Bloomington,” Litton said “This is a high-tech solution to the problem and shows the importance of educational technology and students’ willingness to embrace that technology.”

In “Math Castle,” the player is in charge of defending a castle. Monsters come from one end of the screen to try to attack the castle on the other end. The player clicks on the monster and a math problem comes up. All math problems are multiple choice with four options.

If a student selects a wrong answer, the monster moves closer to the castle. After a certain number of castle attacks, the game is over. If a student gets a problem correct, the monster turns into coins and magic spheres. The player tries to accumulate the coins and spheres. The spheres can be used to eliminate potential answers on some questions, so there are only two or three choices instead of four.

The app, which is not available publicly at this time, was loaded onto tablets for Bloomington teachers to hand out to students. Patton, who wrote the game questions, said “Math Castle” already is helping free up instruction time. The students are enjoying playing the game, even if a few of the questions are difficult.

“We want to challenge them, and this game provides an entertaining approach,” Patton said. “We’ll be evaluating the results at the end of the school year, but it certainly looks promising.”

“It’s a full featured game, so it took a good deal of time to develop,” said Alireza Tavakkoli, director of the UHV digital gaming and simulation program and an associate professor of computer science. “The game is written in Unreal Engine Four, which is the most advanced game engine on the market.”

Tavakkoli said McFaddin and Witt kept in mind the age range of students. While the game was initially targeted to students in third-grade, the end product was expanded to include users from first- to seventh-grade.

“Designing something that would be uniformly interesting was a challenge,” Tavakkoli said. “David and Stephen did an excellent job meeting all the challenges along the way.”

While the pilot study is aimed at the Bloomington students, the app could later be distributed wider and spun off to games on other subjects.

“It’s an educational technology game, and since the back end of the game is effectively open, we could program it to be a chemistry game or a history game,” Tavakkoli said. “In that sense, it’s not limited to a certain topic.”