UHV students donate meals to give nearly $7,000 to food bank 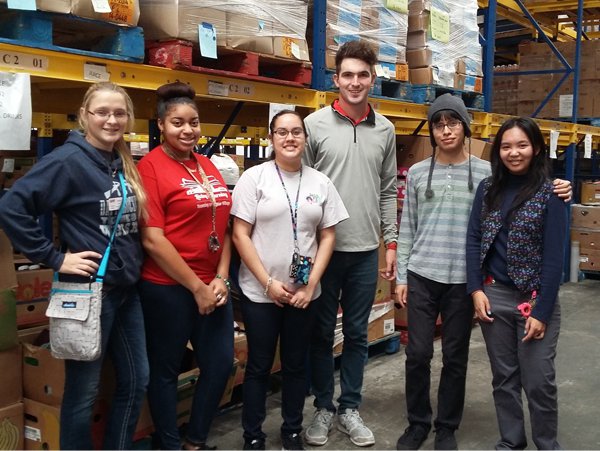 University of Houston-Victoria students recently helped fight hunger in the Coastal Bend by volunteering at a local food bank, cooking dinner at Christ’s Kitchen and donating their own meals for National Hunger and Homelessness Awareness Week.

“This week was about putting others’ needs before our own,” said Ashley Yaws, UHV civic engagement student director. “The overall generosity students demonstrated was tremendous.”

From Nov. 14 to 22, a total of 158 students donated a combined 1,374 meals from their university meal plans. The meals were then converted into dollars by the university. A total of $6,906 was donated to the Food Bank of the Golden Crescent. This more than doubled last year’s total of $3,320.

Food Fight was advertised throughout the week though flyers, social media and a table outside UHV’s dining hall.

“When I spoke to students about what we were doing, many of their eyes lit up, and they were happy to contribute,” Yaws said. “I think we saw such a big increase in involvement this year because students saw the impact they could make on their community.”

Organized by the National Coalition for the Homeless, National Hunger & Homelessness Awareness Week takes place the week before Thanksgiving each year.

“National Hunger and Homelessness Awareness Week events are held by the UHV Office of Civic Engagement annually to recognize students’ efforts to educate, advocate and serve those whose lives are afflicted by poverty-induced conditions,” said Kaleb Briscoe, UHV associate director of Student Life.

“It was a great way for SGA and the university to give back to a community that has given so much to us,” said Christo Varghese, UHV Student Government Association vice president. “In the spirit of Thanksgiving, it was nice to provide people with a meal and help Christ’s Kitchen.”

Students, faculty and staff cooked and served the meal while interacting with community members. Varghese said he enjoyed talking with people about their time spent in the military and hearing some of their past experiences.

Bola Adebayo, UHV Student Government Association president, said she was elated that the number of volunteers doubled from the first time it was held in March.

“The Christ’s Kitchen event was a huge success, and we look forward to volunteering again next year,” Adebayo said.

UHV students also volunteered Nov. 20 at the Food Bank of the Golden Crescent. Students helped sort and pack food and nonperishable items to ship to area counties for Thanksgiving distribution.