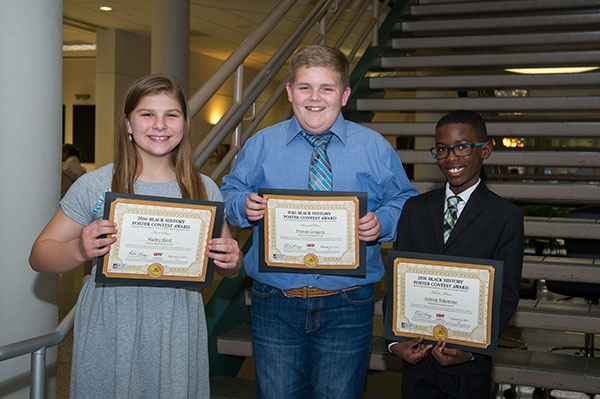 The top three winners of the 2016 Black History Month Poster Contest show off their award certificates Friday after a reception at the University of Houston-Victoria. Hailey Byrd, left, won first place for a poster about Harriet Tubman. Taking second and third were Peyton Gregory and Ashton Valentine. All three are fifth-graders at DeLeon Elementary School.

As the winners’ names were read during Friday’s Black History Month Poster Contest reception at the University of Houston-Victoria, Hailey Byrd’s fingers were crossed.

The theme for this year’s contest was Honoring African American Women in Public Service and Government. Fifth-graders across Victoria Independent School District submitted 75 posters for the contest. The posters were judged by representatives from UHV, Victoria College and the Black History Steering Committee.

“The students did a fantastic job putting together these posters,” UHV Interim President Vic Morgan said. “The posters were creative and well researched. I’m glad students took the time to learn about these important African American women and then illustrate their accomplishments.

Byrd said she and several students in her class were inspired by Tubman’s story. While most of her classmates ended up writing about other subjects, Byrd wanted to illustrate why Tubman was so significant.

The poster was told from Tubman’s point of view. Tubman explained what she did in various years of her life and accompanied her explanation with photos and a map of the Underground Railroad. Byrd dyed the poster with tea and tried to make it resemble a bulletin board. She used old-fashioned looking fabrics to make it seem like something from 1850s.

DeLeon Elementary student Peyton Gregory took second place for a poster about civil rights leader Barbara Jordan. He won a $1,000 scholarship and a VC summer camp waiver. The poster had an American flag background, took readers through Jordan’s career and highlighted two of her quotes. It also included an audio portion. By pushing a button, Gregory talked more about Jordan’s life.

Valentine said he admired the many accomplishments of Howard, including being the first woman to become a four-star admiral and her leadership on the mission to rescue Captain Richard Phillips from Somali pirates.

The posters will be on display through February in the UHV University Center, 3007 N. Ben Wilson St. A few also will be displayed at the Victoria Public Library, 302 N. Main St.