The University of Houston-Victoria was honored Friday with six prestigious ADDY awards for excellence in advertising and marketing, including taking home Gold ADDYs in three categories.

Two of UHV’s Gold ADDYs were for work by the UHV Marketing & Communications staff on the 2014-2015 UHV President’s Annual Report & Excellence Awards. The annual report website, www.uhvannualreport.com, and event collateral materials were both highly praised.

“Every year, the staff works hard to highlight all of UHV’s accomplishments in a unique way in the university’s annual report,” said Paula Cobler, director of UHV Marketing & Communications. “It is wonderful that the talents and creativity of the staff were recognized with Gold ADDY awards. This was also the first time UHV had competed in the American Advertising Federation-Corpus Christi ADDY Awards, and it is gratifying to be recognized at this larger event.” 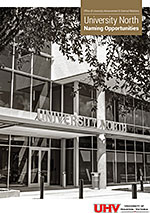 Sanchez also won a Gold ADDY in product information for a pocket folder she designed about naming opportunities for the UHV University North building. Designed for the UHV Office of University Advancement, Sanchez incorporated photos and blueprint sketches with descriptions about different areas inside UHV University North. The project also includes pockets where information about various donation opportunities can be inserted.

“Akalina did a wonderful job on the naming guide,” Blucher said. “She worked diligently and closely with the Office of University Advancement to create a marketing piece that I think could definitely garner some attention at the next level.”

In addition to the three Gold ADDYs, UHV also won:

The ADDYs are the advertising industry’s largest and most representative competition for creative excellence. The awards are determined by judges based on their professional opinions of the quality of work in that category. A certain set of criteria must be met for an entry to receive each level of award.