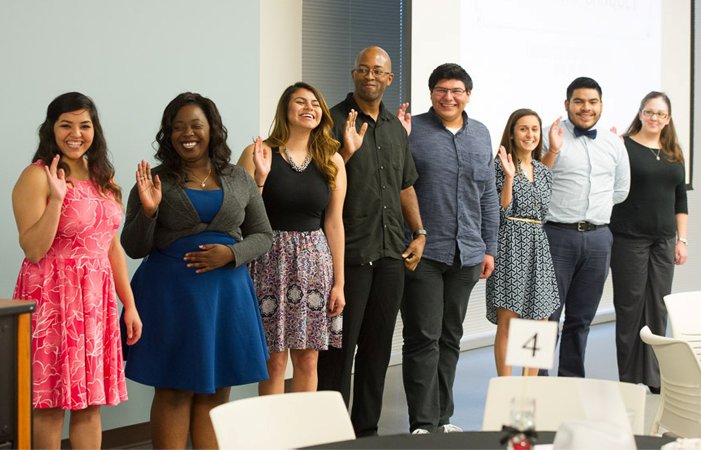 Elected officers in the 2016-2017 University of Houston-Victoria Student Government Association raise their hands to be sworn into office during Tuesday’s Student Organization & Leadership Banquet. Megan Huerta, left, will serve as SGA president.

With 11 siblings, Megan Huerta figured out pretty quickly how to seize an opportunity before it vanished.

So when the University of Houston-Victoria senior saw a chance to become the leader of the Student Government Association, she didn’t hesitate. Students recently elected Huerta as SGA president for the 2016-2017 school year.

“My parents taught me to grab an opportunity because it won’t be there for long,” Huerta said. “Whether it’s a big or small opportunity, my motto has always been to go for it.”

A native of Van Vleck, Huerta already has a long list of accomplishments since she arrived at UHV in fall 2013. She was the university’s first multisport athlete as a member of the soccer and softball teams. Huerta helped expand the National Society of Leadership and Success as the organization’s publicity chair. She also is the leadership development student director for UHV Student Life & Services.

Starting May 31, Huerta will add SGA president to the list. Bola Adebayo served as SGA president for the past two years. The association serves as the liaison between students and the university’s administration. It also enhances student life by sponsoring and promoting participation in student activities. Huerta will serve as the student representative on the UHV President’s Cabinet.

Lola Ojo of Houston will serve as SGA vice president. She has been the speaker of the senate for the past two years. Genesis Castillo of Houston will be director of public relations after serving as an associate justice this school year.

“Many new traditions and services have been introduced to the UHV campus community within the last year, and the Student Government Association has been the driving force behind them,” said Michael Wilkinson, UHV director of Student Life & Services and the SGA co-advisor. “I know that the momentum will only continue under Megan’s leadership. Her passion and vision for the university’s future is second to none.”

Huerta is serving this school year as a senior representative in the SGA Legislative Branch. Her campaign platform was growing UHV’s enrollment and encouraging student involvement. She aims to build UHV’s name recognition in the region and make sure students are aware of the opportunities to join or start student groups.

Huerta said she is open to discussing the idea of having SGA officers pitch in with recruiting by visiting area high schools. She also would like to explore additional ways to volunteer in the community.

“My biggest goal is to incorporate every single student in what SGA is doing,” Huerta said. “It’s possible for nonresidential students to get involved in a number of organizations and other activities. I’ve seen that happen on the athletic teams and organizations I’ve been part of, and the results have been great.”

A 2011 graduate of Van Vleck High School, Huerta attended Wayland Baptist in Plainview for two years. She played soccer for the Jaguars in 2013 and 2014 and has been on the softball team the past three seasons. She has been UHV’s softball and soccer Champions of Character honoree. In February, Huerta was named the River Athletic Conference Champions of Character Female Athlete of the Week.

Huerta also was a volunteer coach for the Victoria Youth Soccer Organization and serves as a tutor and mentor to local elementary students. She said she loves being busy and meeting new people.

“Every time I’ve joined a new organization or started a new activity, I meet someone new and come away with additional life experiences,” she said. “Since I want to be a doctor, my job will be relating to people, so this is providing me with practice.”

Huerta will graduate on May 14 with a bachelor’s degree in biology. She will enroll in the UHV Master of Science in biomedical sciences – professional science this fall. Huerta plans to attend medical school, and her career goal is to be a pediatric oncologist.

She will be the third UHV softball player since 2012 to be SGA president, joining Emily Bergstrom and Jena West.

“Megan is known for her selflessness above all,” said Monica Strube, UHV assistant softball coach. “She strives to be the best she can for those around her while balancing athletics, academics, family and friends with poise.”

Other students elected to the 2016-2017 Student Government Association are:

The speaker of the senate, director of finance and other representatives will be filled in the fall. For more information about SGA, visit www.uhv.edu/student-government-association/ or email sga@uhv.edu.