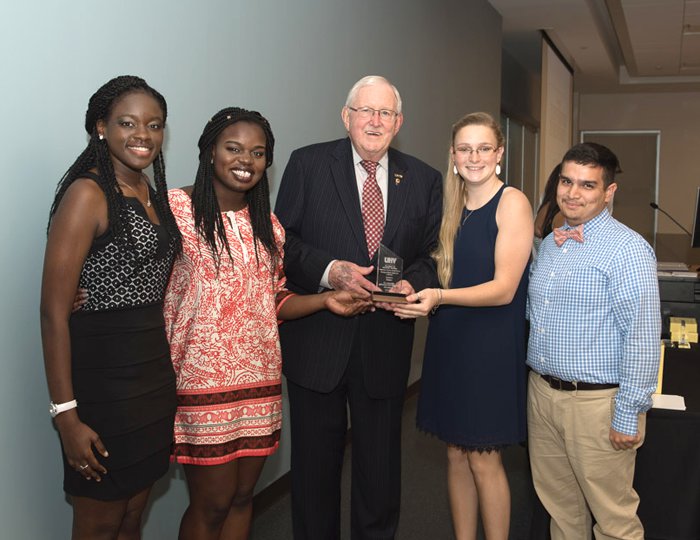 During the 2015-2016 school year, the University of Houston-Victoria’s 31 student organizations and seven interest groups hosted more than 150 events on and off campus.

“Through chartering organizations, we provide support by helping create a foundation so they are able to function more independently,” said Dawn Savage, a UHV Student Life & Services coordinator. “It’s so exciting to see the university grow through these student organizations. These students are leaders who are making their mark here and finding a place where they can fit, and that’s something we want every student to be able to do.”

In addition to celebrating the new student organizations, several awards were presented at the banquet. The awards went to students, advisors and organizations that made an impact on UHV student life and the community. They were selected from a group of nominations submitted by students. A committee of students, staff and faculty made the final decisions.

Each student organization has a UHV faculty or staff member as its advisor. The Advisor of the Year award went to Jang Woo Park, an assistant professor of mathematics in the UHV School of Arts & Sciences. Park is the advisor for the Math and Sciences Club.

“I have a lot of fun working with the students,” Park said. “I don’t have to advise them. They are adults, not kids, and they already have ideas about what they want to do. All I have to do is be with them and support them.”

In the past year, UHV nearly doubled the number of chartered student organizations. Rotaract Club was one of the additions, and it was named New Student Organization of the Year at this year’s banquet. Rotaract Club is an organization that provides community service opportunities, develops the leadership and professional skills of members, and introduces its members to fellow UHV students and leaders within the community.

“Rotaract Club started with an interest meeting that grew into a group that was chartered last year,” said Sarah Lukudu, president of the club and an Austin sophomore. “The volunteering, service projects and coordinated events the club puts on bring people together. We’ve become almost like a family, and we are always looking for ways to get students involved.”

The Organization of the Year award went to the Black Student Union. The group is an educational, cultural, political, social and community service organization. Its purpose is to encourage cultural awareness and dialogues about social responsibility. The Black Student Union first started in 2010 but fizzled after a large group of the members graduated in the 2012-2013 school year. It was restarted in the 2014-2015 school year.

“When I was a junior, I was student director of student organizations, and I saw so many marginalized groups supported on campus, but there wasn’t an organization on campus bringing awareness to black culture,” said Destiny Mayfield, BSU president and a Midland senior. “That’s what the Black Student Union is about, as well as empowering other students to come together. We’re passionate about our culture, and we wanted to bring that life and vibrancy to campus.”

Several other students also were presented awards during the ceremony:

The newly chartered student organizations are Bible Praying Jags, Jags After Christ, Jaguar Cheer Team, the Math and Science Club, Phi Epsilon Kappa, and the Sugar and Spice Baking Club. A representative from each organization received a plaque during the ceremony.

To become a chartered organization, a group must have at least five members, three of whom need to be executive officers with a minimum 2.5 grade point average. The students also must write a constitution, which is submitted along with a charter application to the UHV Committee on Student Organizations. Once the committee reviews the application, it either approves the application for charter or requests corrections.