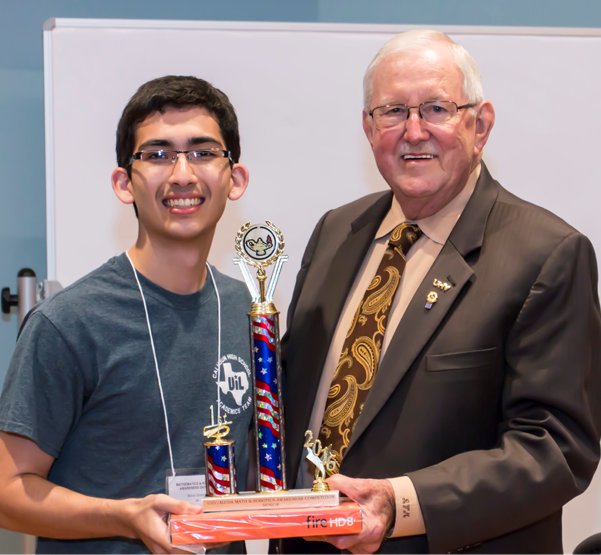 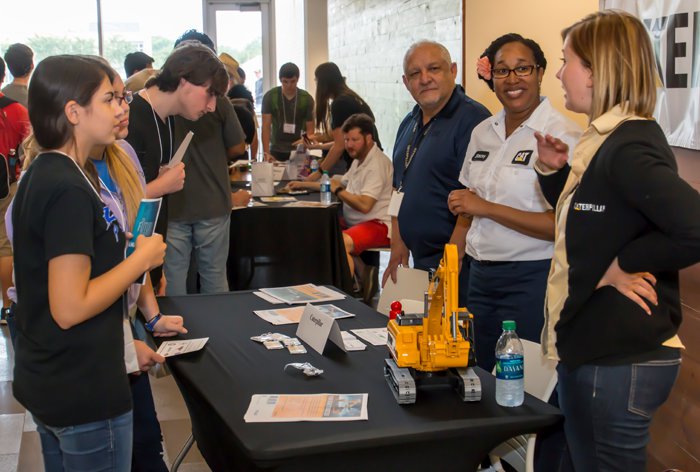 Katie Rowan, right, communications consultant at Caterpillar Victoria, talks with students about the company. Caterpillar was one of several booths where students learned more about science, technology, engineering and mathematics careers.

Blaine Schmidt, a Calhoun High School senior, didn’t know what to expect when he arrived at the University of Houston-Victoria Thursday for the 21st annual Mathematics & Robotics Awareness Day.

Schmidt, who will study applied mathematics at Rice University, got the hang of the proceedings quickly by compiling the best score among the 41 high school seniors who took the math exam.

“I was overcome with surprise when my name was called,” Schmidt said. “It’s been a nice day, and everyone here is really friendly. It was nice to see the different ways math can be applied.”

A grant from Alcoa Foundation funded the event as well as robotics and C++ programming courses for high school students. The grant also will fund summer math and robotics camps.

The four first-place winners of the math competition were from four different high schools. Schmidt, Cameron Reyes of Goliad, Shubham Kathpalia of St. Joseph and Michael Choi of Victoria West each received a trophy and a Kindle Fire. Students taking second and third place in each grade received a medal.

Reyes said he was shooting for first place after taking third a year ago as a sophomore. He said he enjoyed spending the day learning at his future university.

“The building and campus are really nice,” Reyes said. “I intend to enroll at UHV after graduation, so it was nice to check the place out.”

Ricardo Teixeira, a UHV assistant professor of mathematics, said spending a day on a college campus can get students thinking about obtaining a higher education.

“We are planting seeds,” he said. “Some of the students here today would be the first in their family to go to college. It’s great that they have a chance to experience the college environment.”

Teixeira, who did a “mathemagic” presentation, said it was wonderful seeing the students get excited about mathematics, robotics and science.

“I’ve received a lot of great feedback about this event,” he said. “This day encourages students to go beyond what they learn in class. We are giving students a chance to showcase their potential.”

The day began with a welcome by Jeffrey Di Leo, dean of the UHV School of Arts & Sciences. Students then participated in a math contest and attended presentations that showed interesting ways math can be used, including predictions, algorithms and illusions.

This year’s theme was the future of Prediction. Jang Woo Park, an assistant professor of mathematics, made a presentation about what people in the past predicted the future would hold. He showed clips from movies and commercials. He also discussed the use of existing technology, such as videos filmed on phones and Siri.

“You can’t tell the difference now between a film shot on a phone and one shot with a video camera,” he said. “We have a tremendous amount of computer power and technology that is used every day.”

“Our goal for this day is to expose students to the type of work that relates to math, robotics and computer science,” he said. “They are at the point now where they will be thinking about what they want to do for a career.”

Students also spoke with representatives from area companies that use science, technology, engineering and mathematics in their industries. This included Caterpillar, Dow and CivilCorp. The Children’s Discovery Museum had an interactive booth with Cubelet robotics while the UHV Math & Science Club invited students to use math to estimate the number of candies in a jar. Victoria Independent School District had engineering projects on display. The Calhoun Robotics Club also had a robotics demonstration.

Irene Hahn, a math and computer science teacher at Edna High School, said in the past she’s usually brought a few students in one van. This year, she brought 24.

“The students really are interested in robotics and drones,” Hahn said. “They are having a great time. This event is helping change their attitudes toward STEM endeavors and encouraging them to become better students.”

The winners for the math contest by grade and high school were: