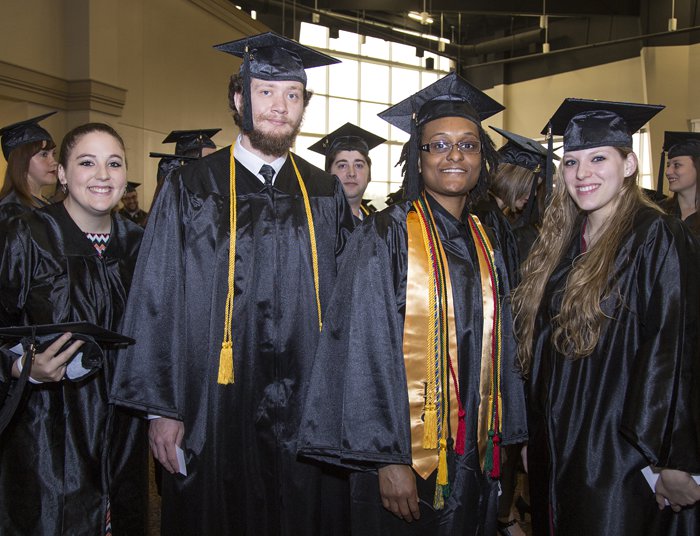 A total of 340 University of Houston-Victoria students are expected to walk in Saturday's commencement ceremonies and see the awarding of UHV’s first honorary doctoral degree and first Alumni Lifetime Achievement Award.

Bingxin Wu, a prominent Chinese entrepreneur, will be awarded a Doctor of Humane Letters at the afternoon ceremony. It is the first honorary doctorate awarded at any UH System campus other than UH.

In addition, UHV President Vic Morgan will present commencement speaker Karen Garza with the Alumni Lifetime Achievement Award, which is presented to graduates whose professional accomplishments, personal achievements or service to others are uniquely exemplary.

“Commencement always is a joyous occasion, and it’s one of my favorite days of the year,” Morgan said. “It’s an opportunity for our graduates to celebrate their hard work and accomplishments with their family and friends. It’s also a chance for the UHV faculty and staff to say farewell and wish them good fortune in their future plans.”

Garza, superintendent at Fairfax County Public Schools in Virginia, will deliver the commencement address at both ceremonies. She oversees the learning of about 187,000 students in nearly 200 schools. The school district near Washington, D.C., is the largest in Virginia and the 10th biggest in the country.

A native of Canyon, Garza’s family moved to Victoria when her father took a job as an English professor at Victoria College. Garza graduated in 1981 from Victoria High School. In 1986, she earned a bachelor’s degree from UHV, and in 1994, she added a Master of Education from UHV.

She led the Lubbock Independent School District before becoming the first woman superintendent of Fairfax County Public Schools in July 2013.

Wu is president and chairman of Sanzhu Group, a Chinese company involved in the health care, medical devices and ecological cosmetics industries. In 2013, Wu and his wife, Shuqin Feng, pledged $600,000 to the UHV School of Business Administration. Their gift was the largest the school has received to date. The donation was used to create an international business center and has allowed 64 UHV students to study abroad in China.

“Chairman Wu’s contributions to UHV have made a great impact on our university,” Morgan said. “It will be a privilege to bestow him with our first honorary degree.”

Beverly Tomek, UHV Faculty Senate president and an assistant professor of history, will serve as grand marshal of both ceremonies. Morgan will confer the degrees, and the deans of each of the university’s three schools will award students their diplomas. The outstanding students for the spring semester also will be recognized, along with faculty members receiving awards for excellence in teaching, research and service.

Roger Welder, a UH System regent from Victoria, will offer greetings on behalf of the UH System Board of Regents.