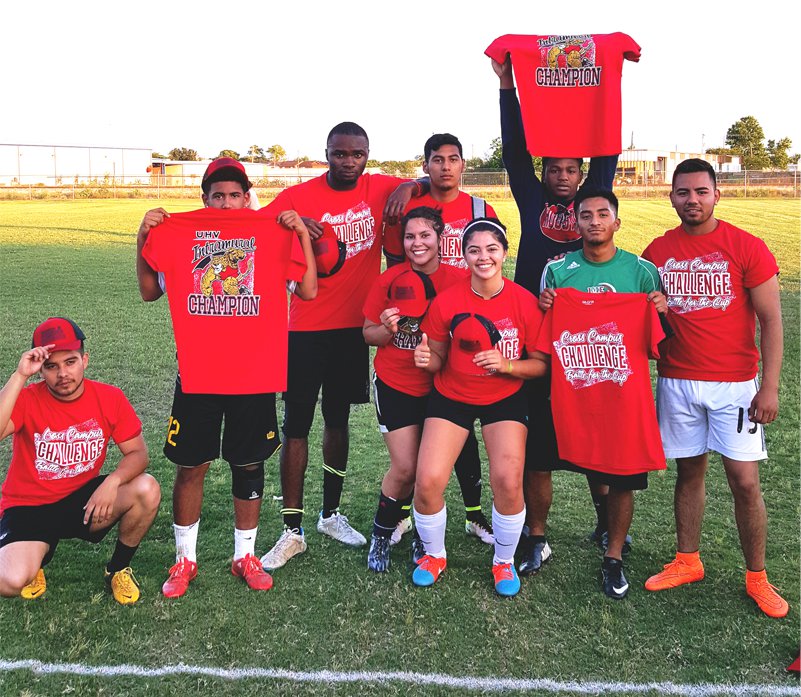 University of Houston-Victoria students on the team Charros de Tusas pose for a photo after winning the soccer intramural championship on May 3. UHV outscored Victoria College 31-29 to win the Cross Campus Challenge: Battle for the Cup.

The University of Houston-Victoria has intramural bragging rights after completing a comeback over Victoria College in the first Cross Campus Challenge: Battle for the Cup.

The idea for the Cross Campus Challenge originated in 2015 after discussions by Michael Wilkinson, UHV Student Life & Services director, and Josh Moore, Victoria College intramural specialist and volleyball coach. Nearly 200 students from both schools competed in flag football, volleyball, basketball and soccer during the 2015-2016 intramural challenge.

“The Cross Campus Challenge was a great way to collaborate with Victoria College and foster that relationship,” said Kaleb Briscoe, associate director of UHV Student Life. “It showed the camaraderie between the schools and showcased the importance of leadership and teamwork.”

Victoria College built a 22-8 lead after flag football and volleyball, before UHV roared back this spring in co-ed intramural basketball and 4-on-4 co-ed soccer. UHV’s Charros de Tusas clinched the victory by winning the soccer championship earlier in May. UHV won the challenge by a score of 31-29.

“It’s amazing the level of talent we have at UHV in football, volleyball, basketball and soccer,” Briscoe said.

With the victory, UHV will get to display a gold trophy for the next year. It will be placed in a trophy case at Jaguar Hall. The traveling trophy will be awarded again to the winning school at the end of the 2016-2017 school year.

“We want our intramural program to continue to grow, which in turn would allow us to offer additional sports,” Briscoe said. “Having almost 200 students participate is a great start for the first year of the challenge.”