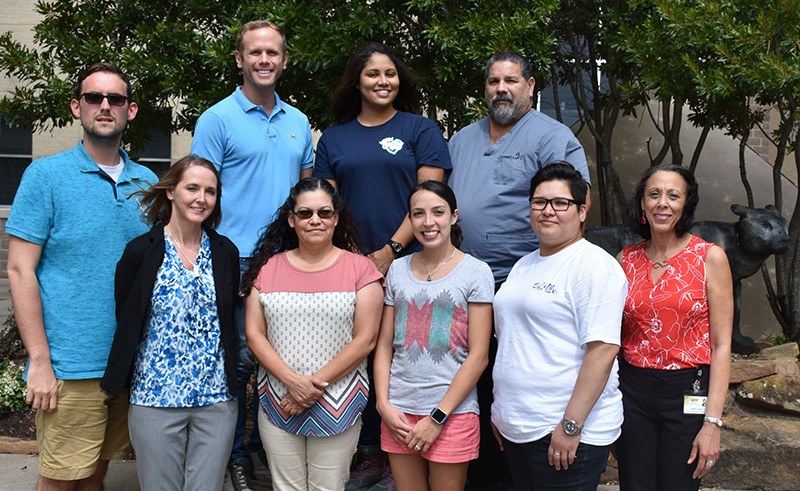 Cindy Hudson, far right, director of the UHV nursing program, stands with scholarship recipients from the first class of the university’s new Registered Nurse to Bachelor of Science in Nursing program. Darlyn Sustaita, front and second from left, was selected as a Johnson Scholar.

Seven members of the first class of students in the University of Houston-Victoria’s new Registered Nurse to Bachelor of Science in Nursing program recently received M.G. & Lillie A. Johnson Foundation scholarships from UHV.

Darlyn Sustaita of Victoria was chosen as a Johnson Scholar. Sustaita will have all of her tuition, fees and books paid as she pursues her RN to BSN degree. In addition, six students who live in the Crossroads area received M.G. and Lillie A. Johnson Foundation scholarships.

Two nursing students who live outside the area and have at least a 3.0 grade-point average received one-time scholarships for the fall semester from the UHV School of Education, Health Professions & Human Development.

This is the first group of students to participate in the university’s new RN to BSN program. The program got underway Monday after an orientation session Aug. 16. The students also received half-priced tuition for their first academic year.

“The support from the Johnson Foundation and the School of Education, Health Professions & Human Development is giving these students the opportunity to move forward in pursuing their nursing careers,” said Cindy Hudson, director of the UHV nursing program.

Housed in the UHV School of Education, Health Professions & Human Development, UHV’s RN to BSN program builds on the associate degree nurses’ knowledge and skills and prepares them to meet the challenges of a dynamic and complex health care environment. The program is designed to develop students’ skills in using evidence in clinical decision-making to help prepare for leadership roles in collaborative practices. The former UHV School of Nursing transitioned to UH in August 2015.

Sustaita, a clinical director at Gulf Bend Center, chose to pursue nursing because she enjoys helping and working closely with people. She earned the Johnson Scholar award from the nursing program based on her GPA and a letter of reference from her manager. Johnson scholars must demonstrate leadership potential and have an excellent academic record.

“I want to have a hands-on influence on patients’ lives,” she said. “It’s such an honor to be part of a new program at UHV and receive this generous scholarship from the Johnson Foundation.”

After starting her career as an RN, Sustaita became a licensed professional counselor and board certified behavior analyst. Once she earns her BSN, she plans to apply for a nurse practitioner program. She chose to attend UHV because it is part of the community where she lives, and it is where she earned her Master of Education in counseling.

“It’s important to be involved in and part of the community I want to serve,” Sustaita said. “I want to continue to help the community through education and mental health services.”

The other recipients of Johnson Foundation scholarships are: