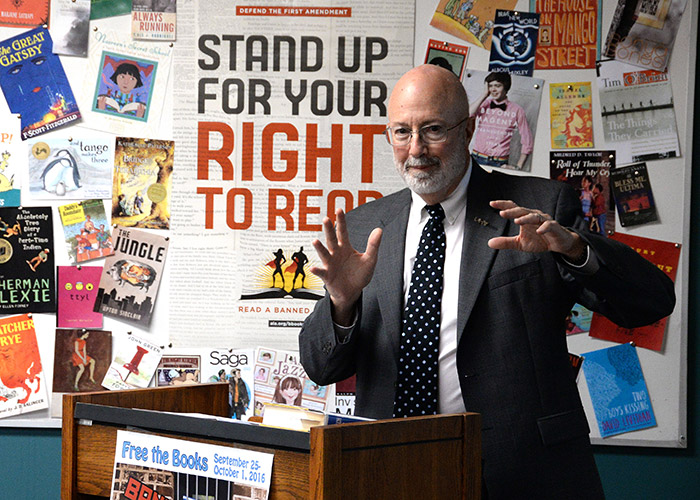 David Cockrum, University of Houston-Victoria interim provost and vice president for academic affairs, talks about why the World War II novel “Catch 22” by Joseph Heller was banned in parts of the country. Cockrum was one of 10 people who read portions of banned books Thursday during the Victoria College/UHV Library’s annual Banned Book Week Read-Out.

Katniss Everdeen, the Mad Hatter, Tom Sawyer, the Little Mermaid and a Ravenclaw student were all seen Thursday in the Victoria College/University of Houston-Victoria Library.

Library staff members dressed as characters from literary works that have been banned or challenged. The costumes were part of the library’s annual Banned Book Week Read-Out. The event is held during national Banned Book Week, which emphasizes the personal freedom to read and access information.

“The effort to ban books from classrooms or libraries is something that still happens today,” said Joe Dahlstrom, UHV senior director of libraries. “It’s a disturbing trend that goes against the values and freedoms we cherish as Americans.”

Books and other published works are challenged or banned for a variety of reasons, Dahlstrom said. Often, it is because the works contain curse words, pornographic or graphic content, or take the name of God in vain or support an unpopular political position.

For Charles Alexander, UHV poet and designer in residence, the effort to limit access to written works is a clear reflection of America’s cultural fears. Alexander was the keynote speaker during the Read-Out, and referenced some instances of censorship, such as the 1997 banning of William Styron’s novel, “Sophie’s Choice,” in Lebanon because of its positive depiction of Jews or George Carlin’s famous comedy monologue “Seven Words You Can Never Say on Television.”

Alexander also shared a personal experience with censorship. As a graduate student, he made a book of his own poems for a typography class. His book was placed with some others in the gift shop of the Madison Art Center in Wisconsin. However, after about a week, he was asked to remove the book because there had been a complaint.

“The ongoing attempt to censor and ban works because of what certain people see as objectionable content brings to mind the old adage ‘the pen is mightier than the sword’ because the ideas in these works are powerful,” Alexander said. “Indeed, the attempt to ban words has been more successful than any effort toward limiting access to weapons in the U.S.”

After Alexander’s presentation, 10 people read excerpts from banned or challenged books and stories including, “The Curious Incident of the Dog in the Night-Time,” “Catch 22,” “The Little Mermaid,” “Mexican White Boy,” “As I Lay Dying,” “Handmaid’s Tale,” “Fahrenheit 451,” “Harry Potter and the Order of the Phoenix,” “To Kill a Mockingbird” and “Cat’s Cradle.” The readers were students, faculty and staff from VC and UHV.

Christopher Nedeau, a UHV freshman criminal justice and forensic science major from Victoria, volunteered to read during the event as part of his “First-Year Experience” course. He chose to read from “Harry Potter and the Order of the Phoenix” because he loves the Harry Potter book series. The series has been challenged in school districts and libraries across the country because of its references to magic and lack of religion.

“People need to realize there are a lot of books out there and try to expand their thinking,” Nedeau said. “The focus shouldn’t be on just one thing, like religion. There’s always something that can be learned, and people need to be free to look for those lessons.”