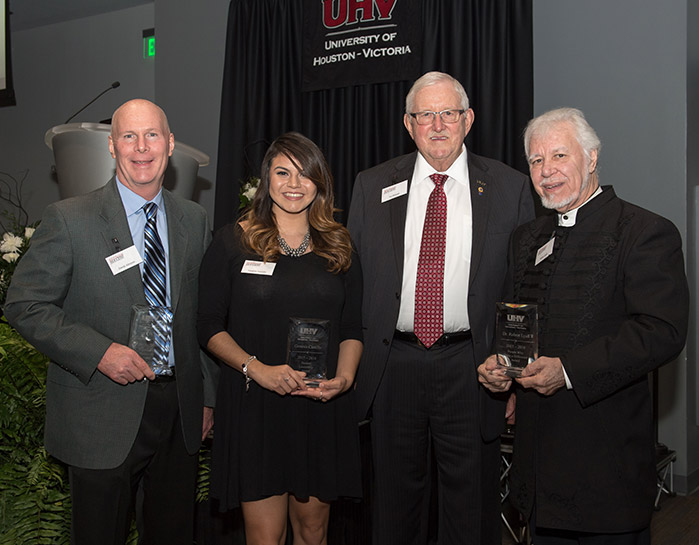 University of Houston-Victoria leaders and supporters gathered Tuesday to applaud successes from the previous year and give out three awards during the 2015-2016 President’s Annual Report & Excellence Awards.

About 220 university representatives and community members attended the presentation of UHV’s accomplishments at the Victoria College Emerging Technology Center.

The theme for this year’s annual report was “Destination: Success.” The report can be viewed at UHVAnnualReport.com.

“The Destination: Success theme is fitting because UHV has experienced so much success during the past year and is growing into a top destination for affordable degrees,” UHV President Vic Morgan said. “The report is our way of letting everyone know how UHV has successfully impacted our students and the community. We are pushing forward to achieve more every day.”

During the evening, Morgan presented three awards to people who have had a positive influence on UHV. Robert Lyall was the recipient of the People Who Make a Difference Award, which pays tribute to people who have supported the university and made a difference in the quality of life of the community.

Lyall was a UHV faculty member from 1974 to 1979. During that time, he founded the Victoria Symphony, which began as a UHV-sponsored program and has grown into an organization that receives broad support from the community. Lyall served as the music director for the Victoria Symphony for 16 years.

Today, Lyall is the general and artistic director of the New Orleans Opera Association. He has conducted symphonies and operas across the globe, including Italy, Mexico, Spain, the Netherlands, Russia and Turkey.

“With the challenges of arts in our country, I am proud that this symphony is thriving today,” Lyall said. “There is an inherent relationship between arts and education, and it was the education institutions that came together and supported this effort.”

The UHV Community Partnership Award was presented to INVISTA for the company’s support and efforts to advance the quality of life in the region and at the university.

In addition, INVISTA is a frequent participant in UHV career fairs and UHV’s annual Math & Robotics Awareness Day. The company also has donated money to the university for scholarships.

“We are very honored and grateful to receive this award,” said David Johnson, INVISTA Victoria site manager. “We appreciate it and look forward to a continued partnership with UHV.”

The Student Leadership Award recognizes a student who demonstrates excellence in academic and leadership qualities. This year’s recipient was Genesis Castillo.

Castillo is a senior psychology major from Houston who is interested in a career in social work. She has served as a senator and associate justice in the UHV Student Government Association. She also is a member of the Hispanic Student Association, Residence Hall Association and Spreading Motivation in Lives Everywhere. She mentors students in the Communities in Schools program and is a senior Resident Assistant in Jaguar Hall.

“I can’t say why I chose to come to UHV, but I can always explain to others why they should,” Castillo said. “My experience here has been amazing. I’ve been able to grow as a person, and I’m grateful for everything UHV has provided.”

In addition to these awards, the event also featured videos about athletics, student life and each of UHV’s three academic schools, followed by speeches about highlights from the past year. These included:

The annual report website features video presentations shown during the event; faculty, staff, student and alumni highlights; UHV’s enrollment and financial figures; a list of donors; and more. Videos filmed at Tuesday’s event and an event photo gallery soon will be added to the website.