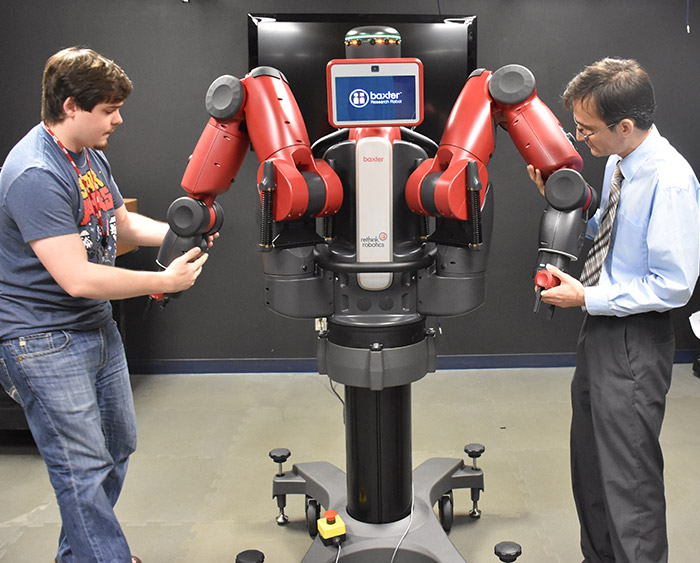 David McFadden, left, a University of Houston-Victoria graduate student from Victoria, and Alireza Tavakkoli, a UHV associate professor of computer science, position the arms of a Baxter robot. The robot was purchased with funds from a federal grant and will be used in Tavakkoli’s research into human-robot interaction in virtual reality.

The University of Houston-Victoria is moving forward with research into robot-human interaction in virtual reality settings after receiving an almost $180,000 grant from the U.S. Department of Defense.

The $179,297 grant from the Army Research Lab is UHV’s third grant from the U.S. Department of Defense. The grant will expand the research led by Alireza Tavakkoli, director of the UHV digital gaming and simulation program and an associate professor of computer science. Funding will be used to purchase two new computer servers, two drones, a robot and a cyberglove system.

“When we first designed this project, I knew that there were about a dozen areas that lended themselves to creating transformational advances,” Tavakkoli said. “I’m looking forward to delving into those research areas using all of the technology we have acquired. We’ll be able to put a magnifying glass on the possibilities in these areas.”

“This system will improve existing technology by giving humans more control over robots’ actions,” Tavakkoli said. “If a robot has to go to an environment that is dangerous for humans, a virtual reality rendering of the environment will allow operators to have a more complete view of the robot’s situation.”

One possible use for robots might be with NASA’s rovers on Mars. Eventually, the rovers might be able to send data back to NASA that can be used to create virtual renderings of the planet’s surface. An operator then could walk next to the robot in the virtual environment and give it directions instead of relying on limited video feeds for information.

“Dr. Tavakkoli’s research is an inspiring look at what could be possible as robotics and virtual technology advances,” said Jeffrey Di Leo, dean of the UHV School of Arts & Sciences. “Research such as this benefits and inspires our science, technology, engineering and mathematics students. I look forward to seeing the advances that will result from this work.”

This project is supported by the Army Research Office of the U.S. Department of Defense under contract number W911NF-19-1-0473, titled, “Enhancing Tele-robotics with Immersive Virtual Reality,” in the amount of $179,297. This information or content and conclusions are those of the author and should not be construed as the official position or policy of, nor should any endorsements be inferred by ARO, DOD, or the U.S. Government.