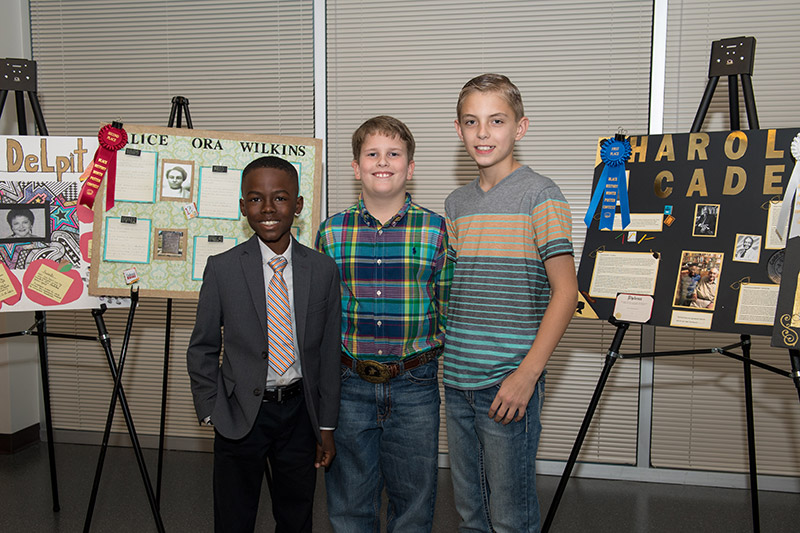 When Austin Valentine chose someone to make a poster about, he decided to go with a personal connection.

The DeLeon Elementary School fifth-grader chose to make a poster about Harold Cade, a Victoria educator who was his father’s principal and now has a school named after him in the Victoria Independent School District.

Austin was awarded first place Friday during the Black History Month Poster Contest reception at the University of Houston-Victoria. He received a $2,000 UHV scholarship and a Victoria College summer camp voucher.

The theme for this year’s contest was Black Educators. Fifth-graders across Victoria Independent School District submitted 140 posters for the contest. The posters were judged by representatives from UHV, Victoria College and the Victoria Black History Steering Committee Inc.

“It is an honor to participate in this celebration of important parts of America’s culture,” UHV President Vic Morgan said. “This contest gives these talented fifth-graders the opportunity to research and learn about the history of black educators and other influential figures who have impacted Victoria and the nation.”

When he was researching Cade for his poster, Austin went to the educator’s home and spoke to him in person. The information from that interview was incorporated into the poster. Austin also included a photo of himself with Cade.

“It’s very exciting to win this contest, and I really liked getting to meet Harold Cade,” Austin said. “I learned about all kinds of things, like how he lived through segregation and started working in education. When I started this project, I didn’t know he was a principal and had a school named after him.”

Kooper Wilkerson, a fifth-grade student at Vickers Elementary School, received second place for his poster about Alice Ora Wilkins. He won a $1,000 scholarship and a VC summer camp waiver. He made his poster about Wilkins after finding her headstone as part of a graveyard tour.

“She was the first female black teacher at the Port Lavaca Colored School at the age of 16,” Kooper said.

Gage Goldman, a fifth-grader at DeLeon, earned third place with his poster about Martha Morrow Foxx. He received a $500 scholarship and a VC summer camp waiver.

The posters will be on display through February in the UHV University Center, 3007 N. Ben Wilson St.