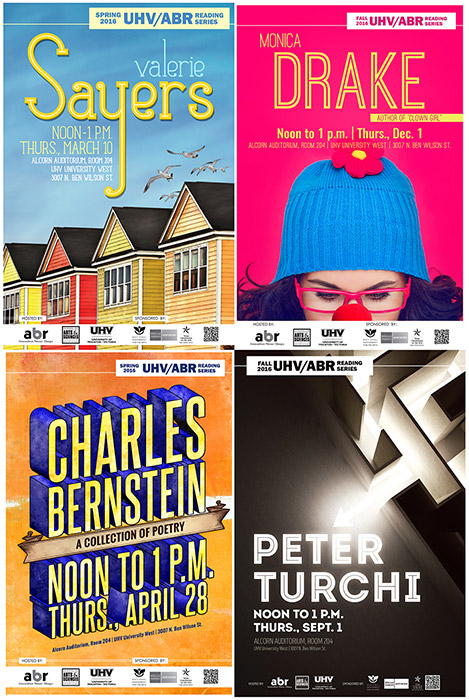 UHV graphic designers Christopher Perez and Akalina Sanchez won a bronze district ADDY award in the poster campaign category. The poster series was a colorful depiction of books or themes from the authors who came to Victoria to give readings. The posters were on display at UHV and throughout the community in the weeks leading up to the readings.

“Christopher and Akalina are excellent designers who put a heavy emphasis on creating quality work,” said Shane Blucher, UHV creative services manager. “It’s gratifying and not at all surprising that they have received recognition for their designs.”

The award was announced Wednesday by the American Advertising Federation District 10 and was one of only three awards won by members of the Corpus Christi-area club. The district awards are open to entries from most of Texas as well as portions of Arkansas, Louisiana and Oklahoma.

The poster campaign was one of four awards that the UHV Marketing & Communications department won at the local level in February. During that presentation in Corpus Christi, the posters received a Gold ADDY, which allowed the campaign to move up to the district competition.

“UHV Marketing & Communications is fortunate to have such excellent designers and creative people,” said Paula Cobler, director of marketing and communications. “Every year, they receive accolades and awards for the outstanding work they produce, and I am proud to see they are continuing that tradition of excellence.”

The ADDYS are the largest creative competition in the country with more than 40,000 local entries competing in 200 markets. The awards are determined by judges based on their professional opinions of the quality of work in each category.