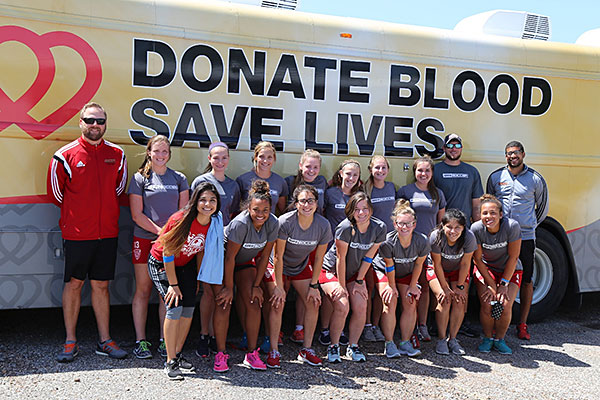 Sponsoring blood drives is just one of the many activities the UHV student-athletes are involved in.

For the second straight year, the University of Houston-Victoria has been named a NAIA Champions of Character Five-Star Institution for the 2016-17 academic year.

Institutions are measured on a demonstrated commitment to the NAIA Champions of Character program and earn points in character training, conduct in competitions, academic focus, character recognition and character promotion. Institutions also earn points based on exceptional student-athlete grade point averages and obtaining zero ejections during competitions throughout the course of the year.

The Jaguars strive to be active not only on the field but in the classroom and the community throughout the year.

“It speaks highly of our student-athletes who take being part of the Victoria community very serious,” said UHV Athletics Director Ashley Walyuchow. “We strive to be the best not only in the classroom, but in the community as well.”

UHV student-athletes have taken an active role in the Victoria community and participate in a number of community projects. Among the projects the UHV student-athletes under take include participation in the Sure Bet Mentoring Program in the local schools, helping at the food bank, sponsoring several blood drives, taking part in cancer awareness and fund-raising activities, as well as helping coach youth leagues and providing camps for the youth and challenger leagues.

The baseball team was awarded the Hank Burbridge NAIA Champions of Character Team Award during the 2017 Avista-NAIA Baseball World Series. Among the activities the team was recognized for was this past season was their rescue efforts in saving a family of four from a possible drowning situation in the Guadalupe River in Riverside Park.

In the classroom, the Jaguars had 61 student-athletes recognized as RRAC scholar athletes this past year, along with four teams (softball, men’s and women’s soccer and women’s golf) being recognized as NAIA Scholar Teams.

The Jaguars also had 20 students-athletes recognized on the President’s List this past year, along with 71 named to the Deans’ List.