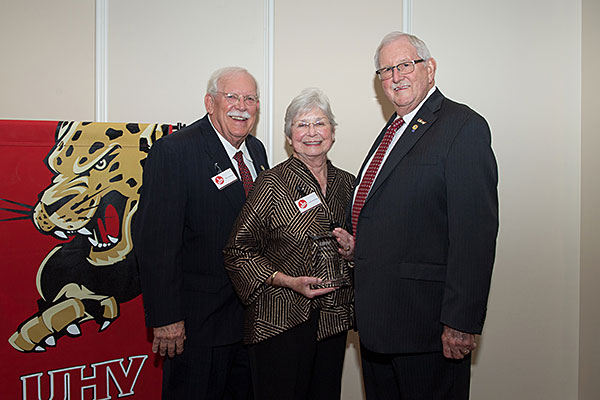 Former Victoria Mayor Will Armstrong, left, and his wife, Linda, receive the UHV People Who Make a Difference Award from university President Vic Morgan. Morgan presented the award to the Armstrongs on Tuesday at the 2016-2017 President’s Annual Report & Excellence Awards event.

About 260 people gathered at the Spring Creek Place Event Center to watch a presentation of the university’s accomplishments and community involvement during the 2017 fiscal year.

The theme for this year’s annual report was “We Are UHV.” The report can be viewed at UHVAnnualReport.com.

“So much of UHV’s progress is thanks to support from the community, and that is reflected in this year’s theme,” UHV President Vic Morgan said. “Whether it is students, faculty, staff or members of the community, we are all part of UHV’s growth, and we want to share the university’s successes with the people who made them possible.”

During the evening, Morgan presented three awards to people who have had a positive influence on UHV. Victoria residents Will and Linda Armstrong were the recipients of the People Who Make a Difference Award, which pays tribute to those who have supported the university and made a difference in the quality of life of the community.

Will Armstrong served as mayor of Victoria for nine years from 2004 to 2013. He has supported UHV since before the university’s founding in 1973. He advocated for the university’s addition of freshmen and sophomores in 2010 and most recently supported UHV’s plan to enhance Ben Wilson Street.

“Victoria is a wonderful town,” Will Armstrong said. “It’s grown from a cow town to a petrochemical town, and then UHV came. We are grateful for what UHV is doing for Victoria, and we know the best is yet to come.”

The UHV Community Partnership Award was given to the Victoria City Council and Victoria City Manager Charmelle Garrett for their support in UHV’s efforts to enhance Ben Wilson Street to create a more attractive entrance to the university and make the street safer for students and other pedestrians to cross.

The Student Leadership Award recognizes a student who demonstrates excellence in academic and leadership qualities. This year’s recipient was Ke’Andre Green.

Green is a senior who is double majoring in accounting and healthcare administration. She originally is from Killeen and is interested in a career in the health care industry.

She is one of the founding members of the UHV Jaguar Activities Board and served as the group’s vice president the year it was created. She now is serving as president for the second year in a row. She also is a general body member of the Student Government Association and a member of multiple student organizations and committees, including the Black Student Union and the University Commons Committee. She also was a Homecoming Committee member in 2015 and 2016. In addition, she has served as a Jaguar Journey group leader for four years.

In 2017, Green received the Wonderful Woman Award at the UHV Student Organization and Leadership Banquet and also earned the 2016 Emerging Leader of the Year Award. She has represented UHV at national conferences, including the Association for the Promotion of Campus Activities and the National Association for Campus Activities. She also was a finalist for 2016 Homecoming Queen.

“I’m ecstatic to receive this award,” Green said. “It’s amazing to know I’ve made such an impact. I’ve made my mark on campus. I want to thank UHV for my experiences, and I hope the university continues to grow and produce leaders.”

In addition to these awards, the event also featured videos about athletics, student life and each of UHV’s three academic schools, followed by speeches about highlights from the past year. These included:

The event concluded with an announcement about the launch of the public phase of the UHV Here, We Go fundraising campaign and a lead gift of $839,775 from the M.G. and Lillie A. Johnson Foundation. The campaign already has raised about $7.4 million since the quiet phase began in 2012, and the university hopes to reach its goal of $12 million by 2020.

The annual report website features video presentations shown during the event; faculty, staff, student and alumni highlights; UHV’s enrollment and financial figures; a list of donors; and more. Videos filmed at Tuesday’s event and an event photo gallery soon will be added to the website.