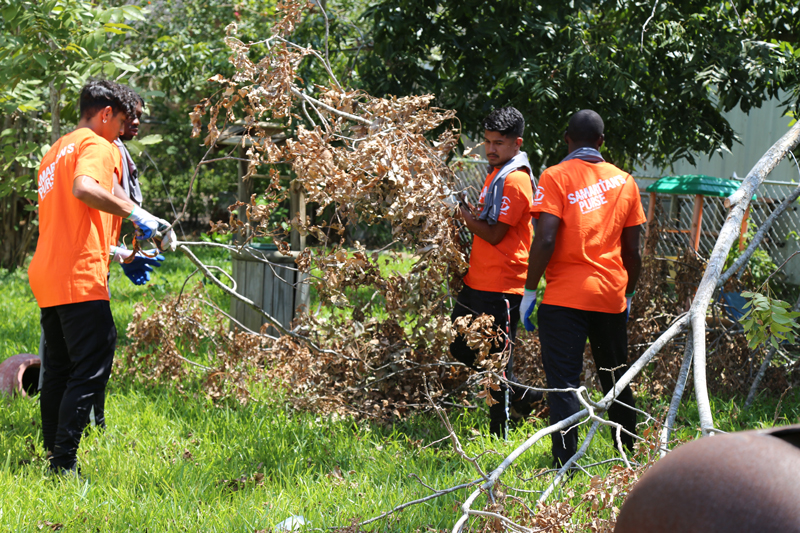 The award recognizes a team that displays exemplary character and sportsmanship on the field/court, on campus and in the community, including outreach presentations of the five core values of the Champions of Character program – integrity, respect, responsibility, sportsmanship and servant leadership.

“Collegiate athletics is about building character, teamwork, leadership and sportsmanship,” said UHV President Vic Morgan. “I am proud of UHV’s men’s soccer team for being recognized for its outstanding character with the Champions of Character Award. “It is a special honor when the team is recognized at the national level for this distinction. I am proud of the team, the coaches and the entire athletic organization at UHV.”

“We are honored to receive the Champions of Character Award from the NAIA,” said UHV head coach Adrian Rigby. “We strive for our players to make a positive impact in the community in which we are fortunate to be a part of. Many of our players made significant contributions to their communities to assist the victims with recovery from Hurricane Harvey. I am extremely proud of the efforts our team makes throughout the year to give back to Victoria and the Coastal Bend region.”

The UHV soccer team is heavily involved in the Victoria community sponsoring numerous camps, blood drives and other community activities.

This past season the major service project for the Jaguars was working with the community following Hurricane Harvey.

Several members of the team that evacuated to the Houston area as the storm approached quickly jumped into action and came to the aid of the victims from the storm that caused massive flooding in that area.

The student-athletes volunteered for two days at the Interfaith of the Woodlands Community Disaster Relief Distribution Center in Conroe. There, the student-athletes assisted in unloading supplies from large trailers, sorting pallets of supplies, and distributing to those in need in the affected area.

Upon their return to Victoria, the Jaguars wasted little time in volunteering with the Samaritan’s Purse International Relief Program to bring help to Victorians trying to clean up from the aftermath of the Category 4 storm.

The group spent time trimming fallen trees and moving tree limbs, as well as helping families whose homes were flooded by the Guadalupe River during the storm. This included tearing out damaged drywall, removing flooring, tarping roofs and clearing debris.

The storm also was a setback for the team as they were unable to practice for two-plus weeks and had its first four games of the season cancelled due to the damage done by the storm that also delayed the start of fall classes.

Senior midfielder Brian Foulger said the delay helped bring out the character of the team that eventually went on to finish the year 11-3-2 and earn its first-ever trip to the NAIA National Championship Opening Round.

“This year our team faced plenty of adversity with Hurricane Harvey,” said Foulger. “We did not practice for two-plus weeks, and that meant the team and I had to have character in order to get back on track mentally and physically to prepare for the season.”

The Jaguars also took part in the annual Movember Movement in November for the seventh straight year to help raise funds for cancer research and help sponsor a blood drive.

“I think being recognized like this for the second straight season speaks to the quality of our coaches and the values they instill in our teams and the expectations they set,” said UHV athletics director Ashley Walyuchow. “I’m proud of Adrian and his soccer team for being recognized in this manner.”

UHV’s Isaac Ramirez-Garcia was also honored at the NAIA Opening Round with the team’s individual Champions of Character Individual Student Award.