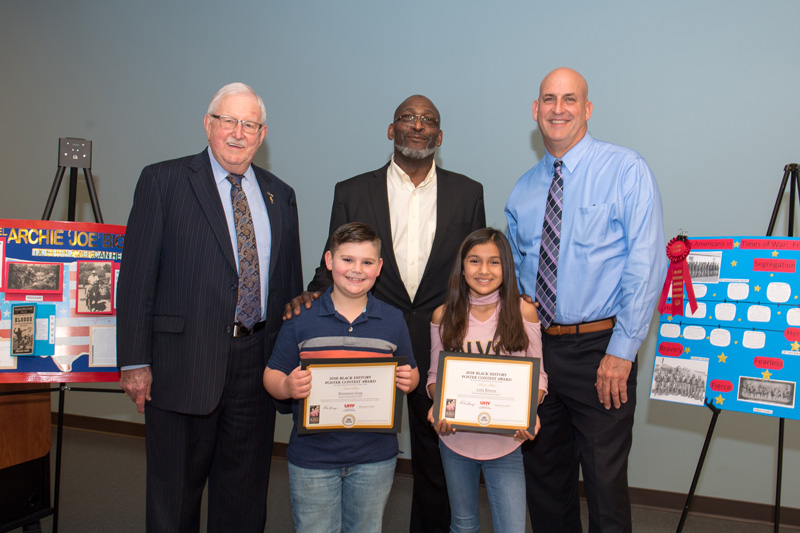 When choosing a subject for his poster, Brennen Gray looked up a website that features African American Purple Heart recipients.

“I wanted to do something about someone who had saved lives,” said Brennen, a 10-year-old Vickers Elementary School student. “I really wanted to show that a person’s race doesn’t have to matter. Anyone can help other people, and their skin color isn’t important.”

Brennen was awarded first place Friday during the Black History Month Poster Contest reception at the University of Houston-Victoria. He received a $2,000 UHV scholarship and a Victoria College summer camp voucher.

The theme for this year’s contest was African Americans in Times of War. Fifth-graders across Victoria Independent School District submitted 100 posters for the contest. The posters were judged by representatives from UHV, Victoria College and the Victoria Black History Steering Committee Inc.

“We love hosting this contest and ceremony because it’s such a great learning opportunity,” UHV President Vic Morgan said. “We received an impressive number of posters that featured some great work by these students. Every year, we’ve seen students explore different aspects of African American history, and their parents and teachers have learned by extension. It’s exciting to see that interest grow and be rewarded.”

“Even though he got shot, he went back to save others, and he made them get medical help first,” Brennen said. “When I first started researching him, I just got this spark in my mind. I wanted to learn more.”

Matthew Trenck, a student at Vickers Elementary School, was awarded second place for his poster titled “African Americans in Times of War: From Slavery to the End of Segregation.” He won a $1,000 scholarship and a VC summer camp waiver. Matthew was unable to attend the ceremony.

Third place went to Lola Rivera, a 10-year-old student at Schorlemmer Elementary School, for her poster about Civil War soldier Christian Fleetwood. She received a $500 scholarship and a VC summer camp waiver. She chose him from a list of possible poster subjects her teacher handed out.

“I thought he was really interesting because he won a Medal of Honor and carried the flag during a battle,” Lola said. “I was excited to win, especially because I received a scholarship.”

The posters will be on display through February in the UHV University Center, 3007 N. Ben Wilson St. To see a short video from the event, click here.