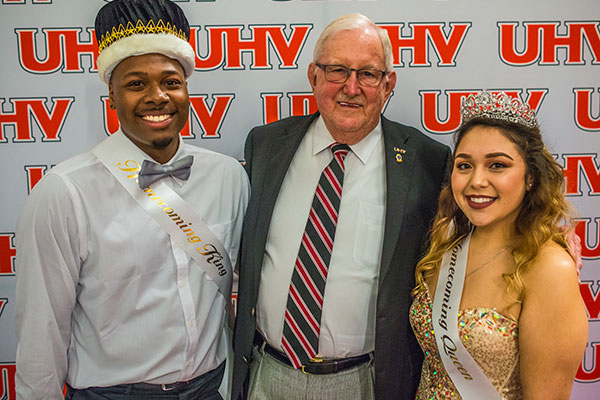 Faizon Matthews, left, and Genesis Corona, right, stand with UHV President Vic Morgan Saturday after being crowned the university’s Homecoming king and queen. The students were crowned during the Party with the Stars Homecoming Dance.

Running for Homecoming queen was a fun opportunity for Genesis Corona to get involved at University of Houston-Victoria and enhance her experience while studying to receive her college degree.

“I thought why not get involved as much as I can while I have the opportunity,” said Corona, a psychology major from San Antonio. “I was pretty good friends with several of the women, so I thought it also would be fun to get to know the rest of the Homecoming Court.”

On Saturday, Corona and Faizon Matthews were named the University of Houston-Victoria Homecoming queen and king. They were crowned during the Party with the Stars Homecoming Dance. UHV students, faculty and staff voted for the king and queen during Homecoming week.

“Faizon and Genesis are two exceptional students who are personable with both faculty and staff, and the student body, and are extremely involved at the university,” UHV President Vic Morgan said. “I am pleased to see them receive this honor from their peers, faculty and staff.”

Being selected as king was a rewarding experience for Matthews, a junior communications major from Baytown.

“I was extremely nervous, but it was awesome to see how supportive everyone on the Homecoming Court was toward each other regardless of the outcome,” he said. “At UHV, I have become more involved in organizations, met new people and have grown as a person, so I’m grateful for the experience here.”

Matthews is a student recruitment ambassador for UHV Admissions & Student Recruitment, director of public relations for the university’s Student Government Association and Black Student Union, and also is involved with other campus organizations. He hopes to go into TV talent entertainment and broadcasting after he graduates in fall 2019.

UHV is a smaller university that makes students feel close to home with its tightknit community, Matthews said. For Matthews, being accepted into larger universities was an honor, but it was UHV that stuck out to Matthews as the best fit for him.

Corona is UHV’s student director of student organizations, secretary of the Jaguar Cheer Club, on the executive board of the UHV Student Government Association, and is a student worker assisting with marketing for UHV Student Life and Services. The win was a humbling experience for her.

“I was surprised to win, but it was a heartwarming feeling to be chosen,” Corona said. “I was working behind the scenes helping with Homecoming week when the tradition started two years ago, so it’s exciting to be on the other end.”

UHV prepares students for success, she said. Professors provide guidance and instill an ambitious attitude into the students, and for Corona, it led her to set higher expectations for herself and her career endeavors.

Corona plans to help children and teens who were abused or neglected after she graduates in May. She is in the process of applying to nonprofit organizations such as Child Advocates of San Antonio and Devereaux Advanced Behavioral Health, that will allow her to pursue this opportunity, and then she plans to apply to graduate school to study clinical psychology.

“As a first-generation college student, I am proud to have earned a degree from a great university that is close to home,” Corona said. “UHV provided me with a wonderful college experience, and I’ll leave with an even happier heart knowing that I was able to leave my mark on the university as its Homecoming queen.”