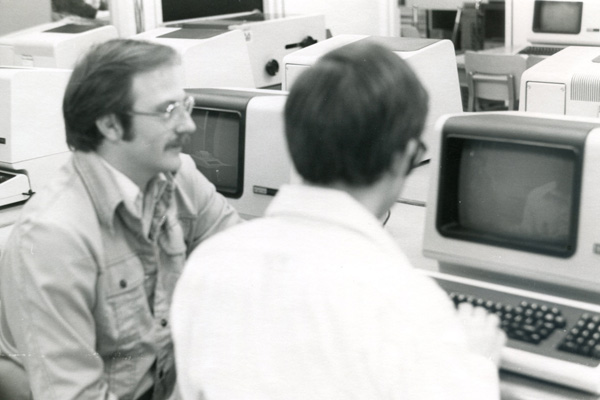 Joe Ferguson, left, helps a UHV student navigate using a computer in the university’s old computer center. Ferguson will retire starting March 20 after working 43 years at UHV. He has been an integral part of the university’s ongoing technical updates and advancements.

The University of Houston-Victoria soon will say goodbye to a staff member who has worked at the university since two years after its founding in 1973.

Joe Ferguson, executive director of UH System Information Technology Shared Services, is retiring starting March 20 after 43 years working at UHV and the UH System. He started as a student worker in the university’s computer center in 1975 and gradually has moved up to be in charge of UHV Information Technology. He has served under all nine of UHV’s presidents and worked directly with four.

“Joe is the consummate professional,” said Dennis Fouty, UH System associate vice chancellor and chief information officer. “His 40- plus years of work and leadership at UHV, and most recently at the UH System, has moved the universities forward in their use of information technologies. Joe has been a servant leader and a partner to all – faculty, staff and students. I personally have enjoyed working with Joe and have benefited from his wisdom and expertise.”

From his original position as a student worker, Ferguson has filled many roles at UHV. He worked as a production control coordinator and manager of the Computing Center in 1976 before becoming director of the center in 1979. The center was renamed Computing Services and then Information Technology. After those name changes, Ferguson was named senior director of Information Technology before moving into the position of senior director of Academic & Student Technology Services. In his current role as executive director of UH System IT Shared Services, which he moved to in 2016, he reports directly to the UH System.

“Joe has been part of the UHV family from the beginning,” UHV President Vic Morgan said. “His work has left a lasting impact on the university’s technological progress, and he leaves a lasting legacy for those who follow. I am grateful for all he has done, and I hope he has a productive and enjoyable retirement.”

During the years since he first was hired, Ferguson has been part of most of UHV’s major technological advancements and developments. One he is particularly proud of is the installation of the university’s campuswide fiber-optic network, which allowed every building on campus to have high-speed internet access as well as a direct connection to other buildings.

Another project he was involved in was the installation of wireless access across campus. In addition to the campus fiber-optic network, Ferguson also helped UHV join with other Texas universities in the statewide Lonestar Education and Research Network to help them share research through a high-speed internet network.

“It’s been exciting to be part of helping UHV move forward as technology developed,” Ferguson said. “Every installation and project had its own challenges, but we were able to meet those challenges and make sure the university has what it needs to succeed. I couldn’t be more proud.”

As a former director, then senior director of UHV’s Information Technology, Ferguson has been involved in the hiring of almost every person in the Victoria campus’s IT office. He also unwittingly created a tradition the department still follows today.

“One Christmas, I thought it would be fun to give everyone in the office a Cow Parade figurine,” he said. “Someone made a joke about us being a herd. Now, whenever a new person joins the team, they are given a figurine and welcomed into the IT herd. They’re such a great group of people, and I’m going to miss working with them.”

Ferguson enjoys movies with intelligent, suspenseful plots, and his favorites are “The Hunt for Red October” and “The Fugitive.” He also enjoys the music of the Moody Blues, Fleetwood Mac and Elton John.

After he retires, Ferguson plans to build a vacation home on some property he owns in New Mexico. He also intends to stay active in Theatre Victoria, in which he serves as president of the board.

“I love working with Theatre Victoria because it’s such an exciting experience,” he said. “The people are always so full of energy. It’s a very lively, creative group.”

Although he will not be on campus every day, Ferguson has left a clear legacy at UHV through his work, leadership and participation on campus. He even created the Doris W. Ferguson Endowed Scholarship to honor his mother, who was a teacher in the area.

“It’s been an honor to be part of UHV’s development and growth,” he said. “It’s been an amazing experience to watch the university go from such a small place to seeing all the new buildings be constructed. The growth was a challenge, but it also was exciting. I can’t wait to see what UHV will do next.”

The university plans to send Ferguson off with a tie-themed party. In the past, Ferguson was known for wearing wild, creative and unusual ties, and several of those ties will be used as decorations during the party.