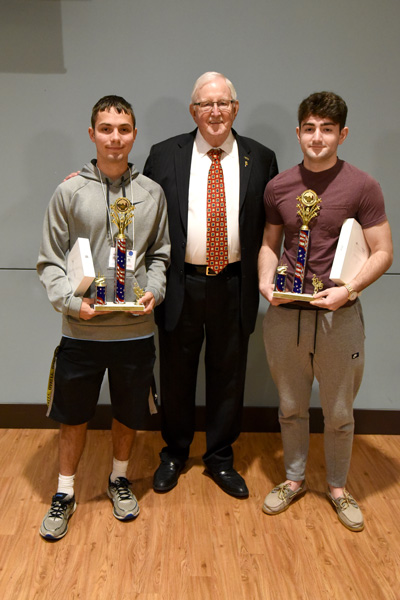 Students tossed their discarded card pieces in the air Tuesday as they tried out a magic trick that uses mathematics to match the halves without looking at the cards.

“It’s a trick I learned when watching a Penn and Teller show in Las Vegas,” said Ricardo Teixeira, a UHV assistant professor of mathematics. “A lot of card and magic tricks use mathematics, and I like to use those principles to inspire young people and show them how many different ways math can be applied.”

A grant from Alcoa Foundation funded the event as well as robotics courses for high school students. The grant also will fund summer math and robotics camps at UHV for 14- through 18-year-olds.

“Math & Robotics Awareness Day always is an exciting event that brings in great students,” said Jeffrey Di Leo, dean of the UHV School of Arts & Sciences. “As UHV is taking steps to expand its space for Science, Technology, Engineering and Mathematics programs, it is encouraging to see so many students taking an interest in these subjects.”

During the day, students attended learning sessions focusing on “Mathemagics,” how to use a Graphical User Interface to write computer programs, and the history and mathematics of the Rubik’s cube. Each session offered demonstrations about how math and technology can be used in everyday life.

Powell already has tested his computer science knowledge in a University Interscholastic League competition, and he will be taking the computer science Advanced Placement test before the end of the school year.

“I started coming to the event my freshman year, but I just started studying computer science this year,” Powell said. “I’m pretty competitive, and it feels good to finish the year with a win.”

The mathematics tests were divided by grade. The second- and third-place winners received medals, and the first-place students in each grade received a trophy and an iPad tablet. The winners for the math contest by grade and high school were:

Di Santo has been attending the event since he was a freshman. He prepared for the mathematics test by looking at questions from previous years.

“My teacher told me I would do well, and she was right,” Di Santo said. “It feels great to know that all the preparation I did paid off.”