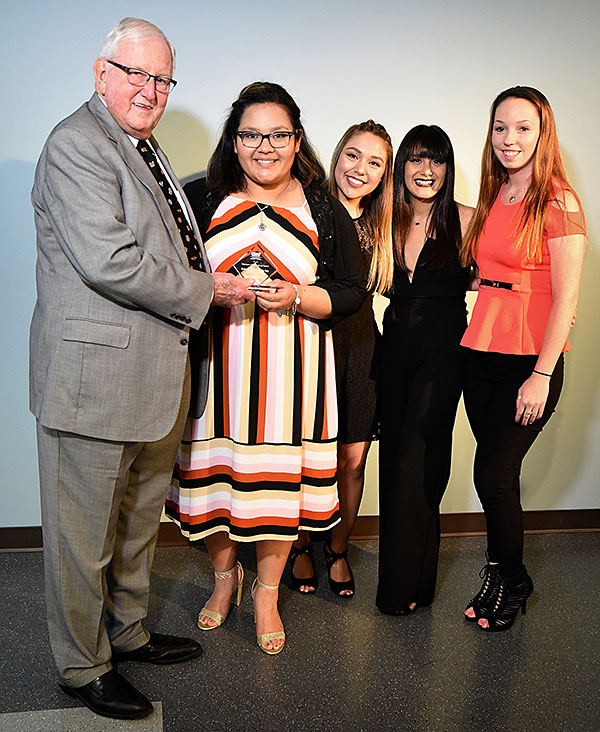 The University of Houston-Victoria Jaguar Cheer Team members usually are leading others with cheers and applause, but this time, they were the ones being applauded and encouraged.

“Receiving this award is amazing,” Medina said. “I started this my freshman year, and it feels great to know it will be here and keep growing after I graduate.”

A total of 125 students, faculty and staff attended Tuesday’s banquet. It was the fifth time UHV has held a formal event to recognize student leaders and organizations.

To become a chartered organization, a group must have at least five members, three of whom must be officers with a minimum 2.5 grade-point average, and a UHV faculty or staff advisor. The students also must write a constitution and submit a charter application. During the ceremony, 10 student organizations received their charters:

The Student Volunteer of the Year award was presented to Jocelyne Martinez of Austin. Martinez has participated in several civic engagement activities throughout the year, including the Alternative Spring Break trip to New Orleans in March and the October Jags Join In – Day of Service trip to Rockport to help clean up after Hurricane Harvey.

“It feels great to be recognized,” Martinez said. “I’ve always loved volunteering. In the past, I haven’t been able to do as much as I wanted, but UHV makes so many opportunities available.”

“This was such an unexpected honor,” Herath said. “It’s extremely exciting and validates why I’m here. Our job as advisors is to serve our students, and it’s great to know they see and acknowledge that.”

Julian Carrizales of San Antonio, Cesar Gonzalez of Rosenberg, Randall Jasek of Palacios, Kevin Moreno of Houston and Keir Walker of Victoria were recipients of this year’s Spirt of the Jaguar award. The award recognizes integrity, citizenship, academics and respect. Students selected are actively involved in student life and encompass what it means to be a UHV Jaguar, said Michael Wilkinson, director of UHV Student Life & Services.

In addition, three students were awarded Student Government Association Senior Scholarships. The scholarships benefit upperclassmen who possess strong leadership characteristics. The first place scholarship of $1,500 was awarded to Sophia Solano of San Antonio. The second-place prize of $1,000 was given to Demi-Lee Ibarra of Brownsville, and Jaiden Lauderbach of Haltom City received the $500 third-place scholarship.

Other award winners on Tuesday were:

“President Morgan has been a consistent supporter of campus life and our student leaders at every step of the way over the past four years,” Wilkinson said. “He has made a lasting impact on our university, and we want to honor him with an award that will carry on his legacy of excellence.”

In addition to awards, Alvaro De La Cruz of Converse gave his farewell remarks as the 2017-2018 Student Government Association president and installed the next group of officers. Deshavian Williams of Wharton will begin his term as the association’s president on June 4.