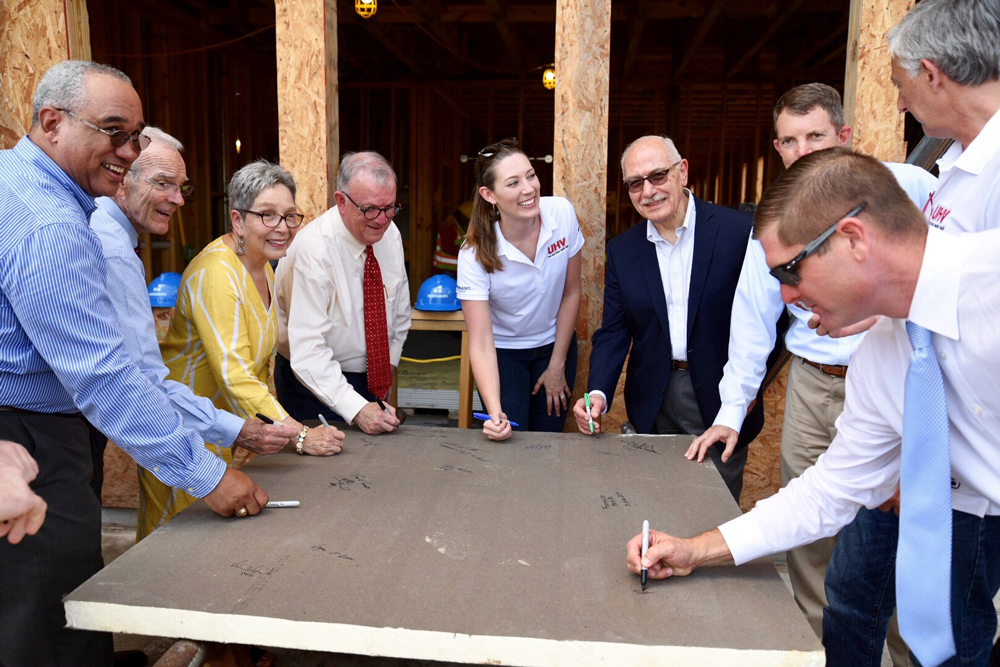 Don and Mona Smith, second and third from the left, and UHV President Bob Glenn, fourth from the left, sign a piece of roofing material on Thursday during a topping-out ceremony for Don & Mona Smith Hall. Representatives from the UH System, UHV, Morganti Texas Inc. and Brave Architecture attended the event to celebrate the end of foundation and framing work on the new UHV residence hall.

This rendering shows what the UHV Don & Mona Smith Hall is expected to look like once it is completed.

Construction on the University of Houston-Victoria’s new $22.8 million residence hall passed another milestone Thursday when a “topping out” ceremony took place, marking the end of foundation and framing work on the building.

“Building Don & Mona Smith Hall is the next logical step in our ongoing plans to bring more students to our main campus here in Victoria,” UHV President Bob Glenn said. “It will allow us to offer students a range of on-campus housing options so they can choose the one that best fits their needs. It will be conveniently located next to the new University Commons student center and library.’”

Representatives from the UH System, UHV, and Morganti Texas Inc. and Brave Architecture, both based in Houston, each signed a piece of roofing material, which will be placed in the residence hall as is tradition. Also in attendance was Nabil Takla, CEO of Morganti Group Inc. in Danbury, Conn.

“Enrollment is on track to be the highest we’ve ever had this fall semester, so it is important to be able to recruit and house the increasing number of students coming to UHV,” said Wayne Beran, UHV vice president for administration and finance. “This new residence hall will be needed as we continue to grow the campus in Victoria.”

Groundbreaking on the three-story, 280-bed Don & Mona Smith Hall took place in June 2018, and the building is expected to be completed by January.

The new 82,000-square-foot residence hall will be located at 3202 N. Ben Wilson St. and will include large classrooms and a reception area. Each floor will have a common kitchen area and study room with a computer lab for students. A laundry area will be located on the first floor. Freshmen will continue to live in Jaguar Hall or Jaguar Suites located in Jaguar Village on the Houston Highway.

Chris McDonald, the 2019-2020 UHV Student Government Association president, is excited for another residence hall to open for students.

“Smith Hall will attract more students to the university,” he said. “It’s especially appealing since it’s within walking distance to the main campus buildings and the new student center. Some universities have buildings that are so spaced out that you have to walk great distances to get to your next class. At UHV, everything will be just next door. There’s so much opportunity.”

Students will have plans for two room options, Lee said. Some amenities still are being considered, but key features for each room will include Wi-Fi, basic cable, a TV and furnishings. A TV and gaming lounge also will be located on the first floor and will exit into an outdoor courtyard area with seating and sports activities.

The new residence hall is named in honor of the university’s provost emeritus, Don Smith, and his wife, Mona. The naming first was announced during UHV’s 2016 fall commencement ceremony, during which Smith was the speaker.

He served as the university’s interim president on four different occasions including when Jaguar Hall, UHV’s first residence hall, opened, and he signed the first contract to lease what is now Jaguar Court. He was interim provost when plans were finalized to build Jaguar Suites. Smith also was involved in the planning for the university’s addition of freshman and sophomores, and helped plan off-campus and online course offerings. A plaque honoring Don and Mona Smith will be displayed at the entryway of Smith Hall.

“When I think of all the people who have helped this university grow, I know there are many other names that could go on this building along with ours. This makes it an even greater honor,” he said. “We’re excited to see the progress that’s been made on Smith Hall, as well as on all the other building projects that are underway.”

The university’s residence halls were at 95 percent capacity during the previous fall semester and are expected to be at full capacity this fall. UHV can house 660 students in its three existing residence halls.

“We’ve achieved a new record in the number of students living in our residence halls,” Lee said. “UHV is focused on attracting and retaining our students, so having additional options in housing at Smith Hall will assist with both efforts. This is an exciting time for UHV.”