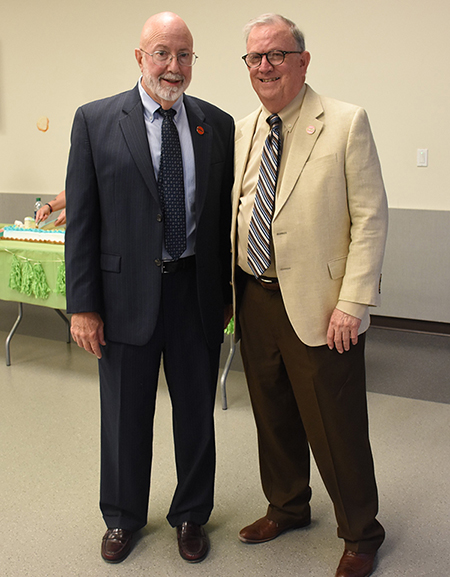 The University of Houston-Victoria’s interim provost and vice president for academic affairs is retiring Wednesday, three years after stepping into the position at the university.

David Cockrum has more than two decades of higher education administrative experience. Cockrum served from 1990 to 2010 as provost and vice president for academic and student affairs at Sul Ross State University in Alpine. Upon his retirement from Sul Ross State, he was named provost emeritus. He started work at UHV on Aug. 22, 2016.

“Dr. Cockrum has had a long, distinguished career in higher education,” UHV President Bob Glenn said. “UHV has been fortunate to have been able to take advantage of his considerable abilities and skills during the last several years. He has made a lasting impact on the institution and all who have had the good fortune to work with him.”

During his time at UHV, Cockrum taught a psychology class for several semesters and was involved in many positive changes. He updated the class schedule to increase the number of face-to-face classes offered by the university, helped UHV join the Houston Guided Pathways to Success initiative and shared his knowledge of Texas Higher Education Coordinating Board policies.

Under his leadership, the university also received approval to begin constructing buildings, including Don & Mona Smith Hall and a Science, Technology, Engineering and Mathematics Building.

“Coming to work at UHV was an enjoyable, invigorating experience,” Cockrum said. “I believe UHV has a wonderful future ahead – just look outside at all the beautiful new buildings that are going up. I am extremely pleased to have been a part of the university’s growth.”

After his retirement, Cockrum and his wife, Sally, intend to stay in Victoria. They have plans to travel in the fall to the eastern Caribbean and spend a month during the summer in the Cayman Islands. Cockrum also will spend time pursuing his hobby as an amateur ham radio operator using Morse code.

“We wish Dr. Cockrum well as he now concentrates on spending more time with Sally and traveling the country and world,” Bob Glenn said.

Chance Glenn Sr. will start Monday as the university’s provost and vice president for academic affairs. Glenn previously worked as dean of the College of Engineering, Technology and Physical Sciences at Alabama A&M University in Huntsville, Ala.