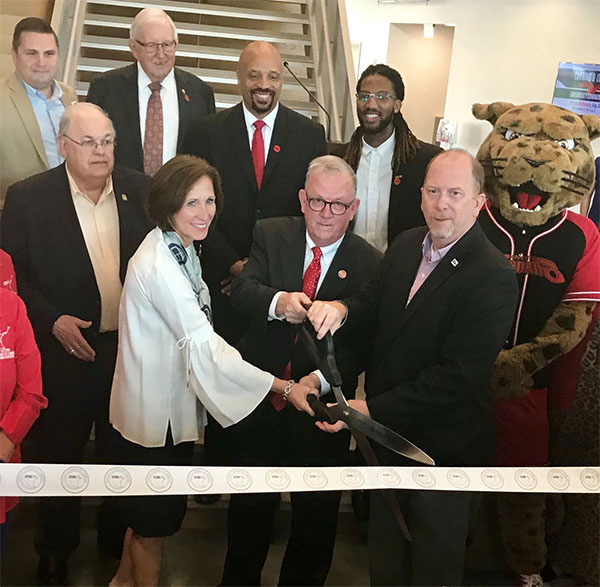 More than 200 faculty, staff, students and community leaders gathered at the University of Houston-Victoria Wednesday to celebrate the opening of the university’s new library and its first student center.

The ribbon cutting for UHV University Commons, 3006 N. Ben Wilson St., began with statements from State Sen. Lois Kolkhorst, university officials and supporters, including special recognitions to honor those who made an impact at the university.

“This building is the culmination of four years of hard work and dedication,” UHV President Bob Glenn said. “As UHV moves forward in its work to become a destination university, this student center stands as a testament to our students’ commitment to UHV and their willingness to invest in the university’s future. It was made for them, and it would not be possible without their support.”

University Commons is a three-story, 80,124-square-foot building located on the east side of Ben Wilson Street, directly across from the UHV University Center. The $29.5 million project was partially funded by a fee approved by students in spring 2015. It is home to the UHV Library as well as university offices that serve students. There also is a multi-purpose room with space for up to 250 people on the first floor and a covered balcony patio on the third floor.

In the library, which is on the second and third floors, students will have access to computers; circulation and reference desks; and a makerspace, an area that offers library patrons an opportunity to create materials using a 3D printer and other resources. The Victoria Regional History Center, offices, meeting rooms, study spaces and the most-used books in the library’s collection are housed on the third floor.

During the ceremony, the university honored Joe Dahlstrom, who retired as the library’s senior director in July, with a plaque that will be hung outside the executive suite on the third floor of the library. The suite was named after him to honor his three decades of service to the university.

In addition to the library, University Commons is home to student-centered offices and spaces. Many of those offices and spaces on the second floor collectively are called the Center for Student Involvement. The center includes Student Life and the UHV Student Government Association office as well as space for student organization members to meet and collaborate on projects. The second floor also is home to the Student Services Suite made up of Disability Services, Student Conduct, Veteran Services and the Dr. Vic and Mary Jane Morgan Counseling Center. This will allow the university to better serve its students, said Jay Lambert, UHV vice president for student affairs.

“The Student Services Suite was designed to serve students by giving them one dedicated space to come for help,” Lambert said. “This will reduce the stress students experience when seeking help and give them a comfortable, student-centered space.”

During the ribbon-cutting ceremony, the university announced the naming of the Dr. Vic and Mary Jane Morgan Counseling Center. The center was named in honor of former UHV President Vic Morgan and his wife. Morgan was president from 2014 to 2018, and 77 community members contributed more than $45,000 total to name the space in Morgan’s honor.

“It is really special that these friends and supporters stepped up and contributed to the university to make this happen,” Morgan said. “This will be a wonderful reminder of my time at UHV, and I am excited to see the continued construction and growth around campus. We worked hard to make this a reality, and it’s exciting to see them come to fruition.”

Taking the opportunity to invest in UHV and honor one of the leaders who made a difference to the university and the Victoria community was an easy decision, said Claud Jacobs, a longtime UHV supporter. Morgan and his wife came to UHV and Victoria at a unique time when the university was pushing for more growth, and they made a tremendous impact, he said.

“Vic and Mary Jane went all-in at UHV and in the community,” Jacobs said. “It shows a lot about what members of the community think of them that they were willing to contribute so much to this honor. All you have to do is drive down Ben Wilson Street to see the lasting impact of their leadership.”