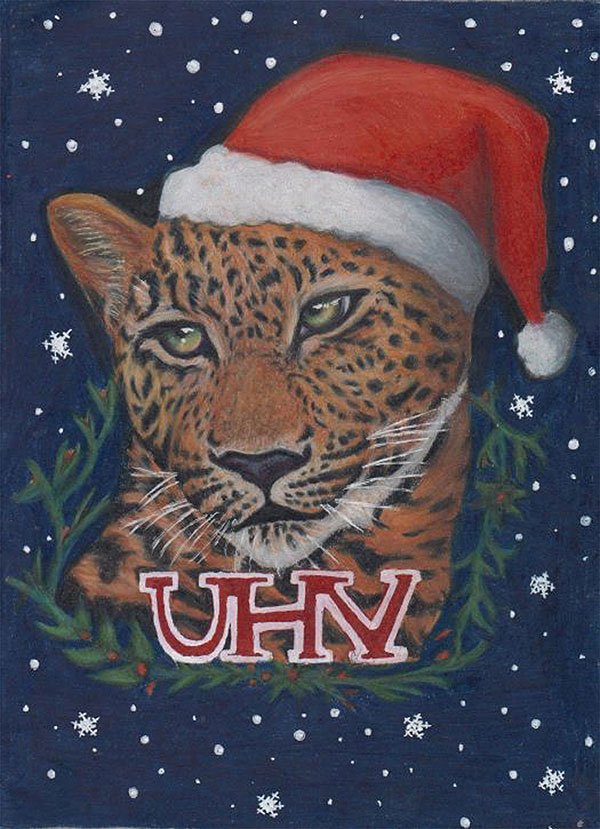 The University of Houston-Victoria President’s Holiday Card Contest winning graphic design was created by Maria Santibanez, a UHV senior computer science major from Houston. She is the recipient of a $1,000 scholarship, and her artwork will be featured on the front of the president’s holiday card.

The results of the second annual University of Houston-Victoria President’s Holiday Card Contest are in, and three students won scholarships or UHV swag for their entries.

“UHV is blessed with so many students who have a multitude of talents,” UHV President Bob Glenn said. “This contest is a way that we can showcase our students while also giving them a way to receive an additional scholarship for their education. I was pleased to see so many students participate, and I look forward to sending this new card out to our UHV family and community supporters.”

This year’s winning design was created by Maria Santibanez, a UHV senior from Houston. She is the recipient of a $1,000 scholarship, and her artwork will be featured on the front of the president’s holiday card. Catherine Tillinghast, a graduate student from Austin, placed second and won a $500 scholarship. The third-place design was created by Nickolas Cooper, a Richmond graduate student, who will receive some UHV swag.

“It felt great to know my artwork will be on the official UHV president’s holiday card,” Santibanez said. “As soon as I saw the email that I was the winner, I was so excited that I had to tell my family and friends.”

Twenty eligible submissions were reviewed by a panel of judges selected by Glenn. Entries were evaluated based on the artwork’s creativity and artistic merit. The contest was announced in early October, and students submitted artwork through Oct. 31. Submissions included illustrations, paintings and photography.

Santibanez is a computer science major, but drawing is one of her hobbies. Her entry featured a jaguar wearing a Santa hat.

“I like working with colors and seeing how they can make things feel real,” she said. “When I was looking for ideas, I saw a picture of a jaguar and decided I wanted to draw that.”

Although Santibanez plans to graduate in December, she will be returning to UHV for a few extra classes in fall 2020. The scholarship will be a big help in covering tuition for those classes, she said.

Tillinghast’s second-place painting showed a family of jaguars sleeping in front of a fireplace while another jaguar looks out a window at falling snow. She has been painting since she was a child, and it is a relaxing and cathartic way to escape from stress, she said. The contest gave her an opportunity to use those talents.

“I just love wintertime and the holidays – sitting by the fire, snow – although not often in Texas – and being with family,” she said. “When I saw the holiday card contest, I knew I wanted to recreate those feelings in my art.”

In addition to the opportunity to paint, Tillinghast saw the chance to earn a scholarship toward her Master of Arts in forensic psychology. She personally is paying for school, so the potential for a scholarship was an added incentive, she said.

“It’s just so cool that the university provided this opportunity for students to showcase their work and express themselves,” she said. “I love painting, and I never really get a chance to do it much anymore. I saw this opportunity, and I knew I wanted to participate.”

The third-place design by Cooper featured a photo of a snow globe with a pawprint design on the base and a photo of UHV inside the globe. Cooper is pursuing two Master of Education in counselor education degrees in clinical mental health counseling and school counseling.

“I wanted to construct a card that symbolized the environment of the school along with a holiday atmosphere,” he said. “It feels great to have created one of the top three designs.”