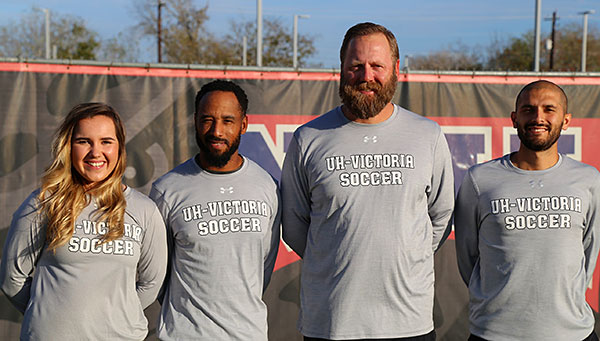 UHV soccer coaches from left to right are Lauren Leslie, George Kee, head coach Adrian Rigby and Alex Baez. The staff was named the USC Men's Soccer West Region Staff of the Year for the NAIA.

The University of Houston-Victoria men’s soccer staff was named the United Soccer Coaches 2019 Men’s West Region Staff of the Year for the NAIA on Wednesday.

The staff now will be placed onto the National Staff of the Year ballot. The voting for National SOY is scheduled for Monday, Dec. 9, and the winner will be announced on Dec. 20.

“We are truly honored and humbled to be recognized by our peers in the NAIA,” said Rigby. “Our coaching staff works tirelessly in the pursuit of excellence on and off the field, and this recognition of our efforts means a great deal to us.

“We share this award with our student-athletes that we have the honor of coaching. They are a great group, they have worked hard all year, and they make it easy to implement our ideas at training sessions.”

The Jaguars just completed their most successful season in the 10 years of the program, going 16-1-3. In 10 seasons with UHV, Rigby has compiled a 98-55-16 record in men’s soccer.

Rigby was named the Red River Athletic Conference Coach of the Year after the Jaguars claimed the RRAC regular season and tournament titles for the second time in three years.

Kee is in his second season with the Jaguars, while Baez completes his first season. Leslie is in her first year as a graduate assistant after a four-year career with the women’s soccer program.

The Jaguars opened the 2019 season with a record 10-game win streak before battling to a 0-0 tie against Texas College. The Jaguars would go on to finish the regular season at 15-0-2 before compiling a 1-1-1 record in the postseason.

The Jaguars also broke into the NAIA Men’s Soccer Coaches’ Top 25 for the first time when they were ranked No. 22 in the final regular season poll. The Jaguars had received votes in the previous five polls before being ranked.

The Jaguars’ season ended in a 1-0 overtime loss to Martin Methodist in the first game of the NAIA Opening Round Fayette Bracket in Columbia, Mo.

The Regional SOY and National SOY awards will be presented at the United Soccer Coaches convention in Baltimore in January.