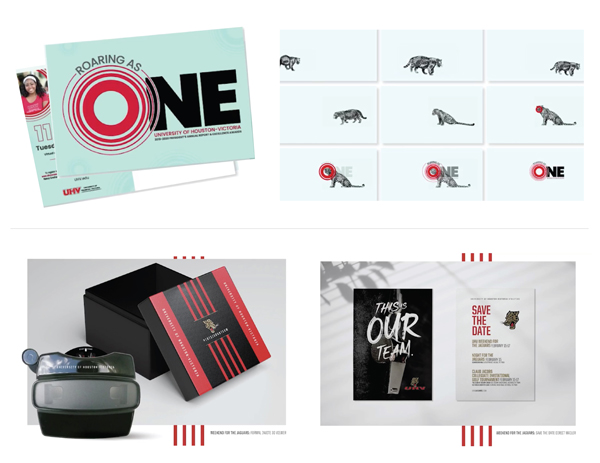 UHV entries recognized with ADDY awards Friday night were, top, pieces for the 2019-2020 UHV President’s Annual Report & Excellence Awards and, bottom, a UHV Athletics campaign for Weekend for the Jaguars.

The University of Houston-Victoria was honored Friday night with three prestigious ADDY Awards for advertising excellence, including an award for the best sales and marketing entry in the competition.

“The ADDY awards represent the culmination of the Marketing & Communication team’s hard work each year, and it always is gratifying to be recognized by our peers in the advertising industry,” said Paula Cobler, senior director of UHV Marketing & Communications. “The team takes great pride in representing the university in the best light possible, whether that is through the website, social media channels, marketing materials or communication pieces.”

The Best of Sales & Marketing and Gold ADDY awards were for a UHV Athletics campaign for the 2020 Weekend for the Jaguars event. The pieces were created by graphic designer Larzell Cowan and included a save-the-date mailer, and a formal invite featuring a gift box containing a 3D viewer with a reel set highlighting UHV athletes.

“UHV is fortunate to have an incredible team of graphic designers,” said George Rodriguez, UHV creative services manager. “Larzell’s work shows the commitment to quality and excellence that UHV is known for. I am proud of his work and the work of all of our team.”

The ADDYs are the advertising industry’s largest and most representative competition, attracting more than 40,000 entries every year in local AAF competitions. Selection of the most creative entry in each category is decided by a scoring process in which a panel of judges evaluates all creative dimensions of every entry. Gold ADDY awards are the highest level of creative excellence and are judged to be superior to all other entries in a category. The number of awards given in each category is determined by the judges based on the relative quality of work in that category.